end of May, we were for a visit at the great Tüffenwies-Layout in Zurich/Switzerland for a 4 days public event with a lot of steam and fun.

For this event, we raised a spar tree with a typical log loading system, calles guy line loading, which was used on several american logging railroads.

The logs were lifted on to the log cars by the steam-powered winch, which is mounted to the Shay. With the additional gypsy head, the whole train can be moved to load all the cars.

More about my 5″-gauge / 2″-scale logging railroad is shown on my BCRR-website, which is linked in the menu bar at the top.

Posted by Gerd on Sunday, 29 June 2014 with 2 Comments
in Layout construction

I added some weeds on the first module to finish the vegetation part of the layout scenery. 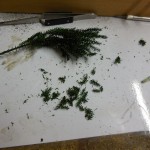 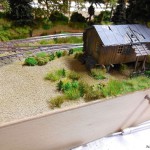 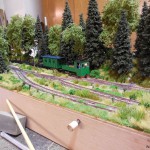 Next I’ll build the loco facilities with coal dock and water crane.

The ground scenery is done

I just finished the work on my ground scenery around the backwood station. Maybe I’ll add some grasses here and there during the final detailing.

The structures are also set in place, but the engine shed was not glued into place to have access to the rails inside. The barrack was glued to the layout. 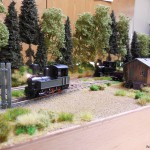 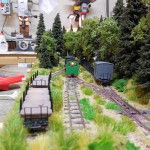 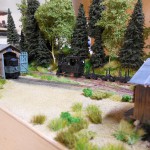 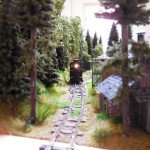 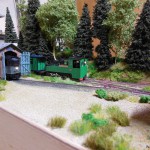 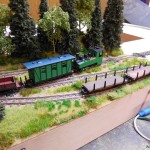 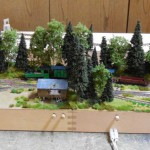 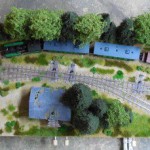 The storage spurs at the right end of the station are surrounded by high grass fields and turn out great. Unfortunately the colors were not given correct by the photos above. I should make some new photos outside with real daylight.

Now the station is mostly done except for details, figures, water crane, coaling dock and maybe a back ground.

Once the trees were done, I started with the ground scenery. I always use this sequence, since I destroyed my ground scenery often while drilling holes for the trees. It’s also hard to plan correctly which tree will be set on which place and so on. I use ready-made grass foliages from Busch in different […]

A forest is grown

I started with the scenery on my logging railroad by planting some trees. Since the station is located deep in the woods, I set many trees to the back ground and some to the fore ground. This gives the look of a small station, settled on a glade. I used needle and leaf trees to […]

Posted by Gerd on Sunday, 22 June 2014 with 1 Comment
in Operation Sessions

Posted by Gerd on Friday, 20 June 2014 with 1 Comment
in Rolling stock

Many years ago, my love for Hon30 trains started with these little Roco steam locos. But the performance was not so great and at least I quit all my ideas for an Hon30 logging railroad. With the new locos from Minitrains, I started again with my logging railroad… And than I found a Roco steam […]

The fiddle yards are done

I just finished the fiddle yards today. On the large fiddle yard, I milled the area below the turnouts 1mm deeper with a router, since the Fleischmann Turnouts are 1mm higher than the Peco flex track. Now the track heads are even and the trains run very well. I added wooden buffer stops to the […]

Posted by Gerd on Wednesday, 18 June 2014 with 3 Comments
in Rolling stock

Last week, I got my first model of the new MinitrainS HFB Brigade locomotives. In this post, I’ll show you the loco. The models are really great. They are a little bit oversized and they turn out in 009 instead of Hon30. That’s a compromis to the prototype gauge of 600mm to the model gauge […]

The following pictures will show the different variants in which the corner modules can be set up. You can use them straight for a shelf layout, in two different corner versions or at a 180° curve. Once this complex part was done, I finished the rest of the track work by easy-going. Now I’m able […]