As mentioned in the last post, here are the photos of the 3rd segment ‘wood storage at the charcoal burning’.

As the space around the charcoal piles is rare and I had no idea what to place on the connecting little 20x20cm segment, I combined both segments into one scene. I placed two storage sheds for tools and other stuff and I’ll add wood piles later which will be used to set up new charcoal piles. 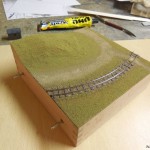 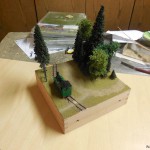 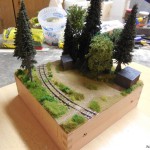 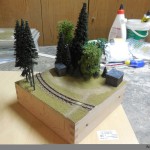 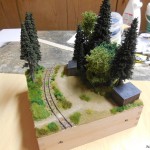 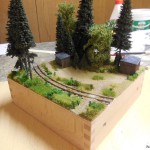 Once I added some details, wood piles and figures, this segment will be done too.

Adding grasses, bushes and other greens

Hello again for another progress report.

Once I got the trees planted last week, I started with the ground vegetation with grasses, bushes and other plants. The ground vegetation at all is the same as on my first segment to continue the same style. Now it needs only some details, figures, some wood piles and so on… 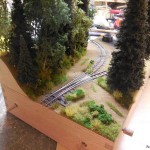 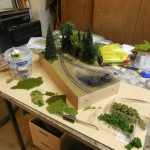 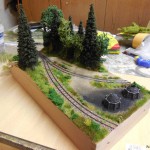 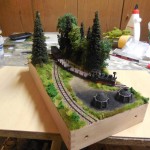 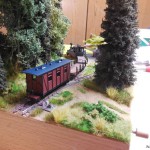 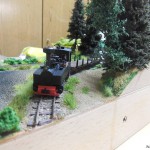 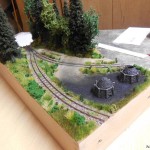 Beside this segment, I also made progress on the following 20x20cm segment for the curve, which will show the material storage of the charcoal burning. Photos of this segment may be added next weekend.

More trees for the logging railroad

Posted by Gerd on Thursday, 21 August 2014 with 2 Comments
in Layout construction

Hello again to another issue of my blog.

I did some good progress on my char coal pile segment. The tracks are ballasted now and I added the ground cover with fine turf and dirt to make the roads and base for the vegetation. Once everything was dry, I added wooden boards between the rails on the level crossings. 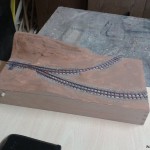 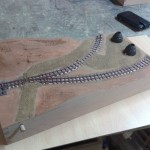 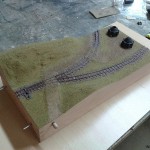 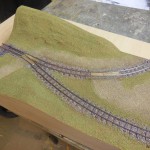 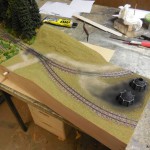 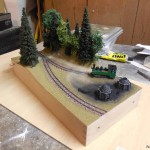 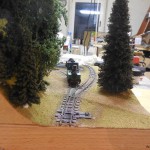 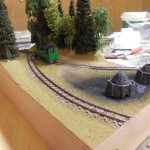 I assembled and weathered the char coal piles and some sheds for tools and stuff. The sheds will not fit on this module and will be placed in the following little curved segment together with wood stacks.

Let’s see if I can make more progress during this week to get the second segment finished. Once it’s done, the smallest version of my modular layout is ready for first service. But planting the vegetation and detailing the char coal pile area may take several hours…

Posted by Gerd on Sunday, 17 August 2014 (Comments Closed)
in - Uncategorized

I did a log-train-run in my backyard with my Fn3-stuff in August 2014. I laid my tracks as a point-to-point line instead of a loop and did some “log train action”. Please accept YouTube cookies to play this video. By accepting you will be accessing content from YouTube, a service provided by an external third […]

Another Wednesday has past and I got the landscape finally shaped. I used a wire brush in my hand drill to form the foam. This works very well and fast, but attention – you may take off more material as you like very quick. Smaller gaps and foot hills are filled/formed with plaster. Also the […]