Disconnect log cars are the most common way to haul logs on early logging railroads. My little railroad owns 10 pairs of this log car type which are based on MinitrainS-models. I did some customizing on the platforms and added new log bunks. 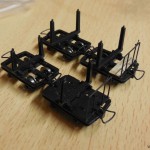 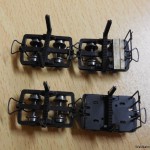 The first photo shows the different between the original MinitrainS-models in front and my rebuild version in the back. The larger log bunks with stakes are 3D printed parts from Shapeways. I removed the platform from the cars, cut the rear part away and glued them back in place. I also added some wooden boards from a deco paper sheet. Some of the braked cars got a brake man added.

All cars got a weathering and are now ready for service on the Waldbahn Eusserthal. Only the log loads are missing.

The 5th Hon30 module gets green

meanwhile, I did some progress on my 5th module, called “Log landing Dürrental”. The tracks are ballasted and I glued the ground turf to the surface. The track of the loading spur is also covered by green turf, since this track is not laid in ballast. It’s a temporary loading spur laid directly to the ground. 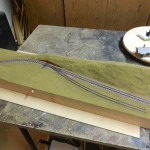 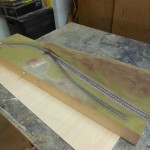 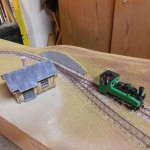 Once the glue was dry, I used the airbrush to add shadows were the forest will grow and gravel ground around the little house. Behind the turnout, I need some retaining wall and I cut a piece of foam material to size and glued it into place. I’ll repaint some stones in different shades to make the wall look more realistic. This scene will become totally finished once the plants and greens are arranged around the wall. The structure in the front was build some weeks ago and is now glued into place.

In front of the loading spur, I’ll add a wooden loading deck where the logs are rolled onto the log cars. But size and design is not 100% sure at the moment. I’m still on research for some prototypes.

Beside the work on this module, I start to customize my rolling stock. But this will become another post tomorrow.

Posted by Gerd on Wednesday, 24 September 2014 (Comments Closed)
in - Uncategorized

I finally added photos and a short description of my Hon30-segments to the top menu bar. The fiddle yards and the 5th segment are still missing and will be added once finished.

The 4th segment of my Hon30 layout is done

Hello, due to special events at last week, I was not able to post the updates on my Hon30-layout and I’ll bring them this week. Meanwhile, I finished the 4th segment with the little pond on it. This pond is surround by many trees to create a special scene when the train takes its way […]

A video about my flexible and modular Hon30 logging railroad

Posted by Gerd on Friday, 12 September 2014 with 3 Comments
in Layout technique, Operation Sessions

Hello guys, I uploaded a little video that shows the flexible and easy assembling of my modular Hon30 logging railroad layout. It’s fully “plug&play” and can be set up in a few minutes and if you like, you can just change the setup during your operation session. I started with a simple shelf layout design, […]

Quick building another segment for the WBE

Good morning, yesterday, I had a real good evening and I did real good progress on my 4th segment. I started with ballasting the tracks and once the glue was well set, I added the basic ground cover with fine turf. This way, parts of the turf will also stick to the ballast glue on […]

Hello, yes, another Wednesday has passed and I spend some more time on my logging railroad. For my char coal burning, I needed some stacks of split logs/pulpwood. While most of the plastic stuff from the kits doesn’t look well, I decided to make them myself as usual. I took some fine twicks and cut […]

On the tracks with my Bear Creek Railroad

Hello, last weekend, I took the chance for a public operation day at our club layout in Gustavsburg (Germany). After a break for several month, I steamed up my little Forney “Maggie” and she hauled a long mixed local freight train. My dad was also there for a visit and I was able to make […]