Last Sunday, the 2015 live steam season started at our club layout and I took the Shay with a short freight train there to test the Shay after the modifications I made.

I also tried my new transport rack in our new car, which has much more room for family and model trains. The new rack showed some needs of improvements here and there. I’ve to rebuild it for its next use to get the optimal loading capacity. 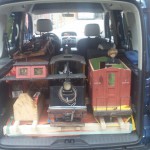 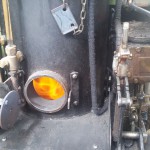 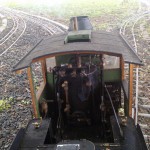 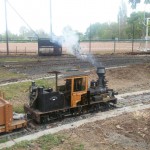 Once the loco was steamed up, I hooked on the freight train and enjoyed the well running loco after the long winter break. By all the joy, I missed to tak photos (as usual). At least, the isolating work from last week didn’t show up any improvement to the water/steam thing. Well, I had fun adding the isolations and it looks nice.

BCRR – Working on the big Shay

Posted by Gerd on Sunday, 26 April 2015 (Comments Closed)
in Workreports

During the last steam up in January, I spotted some issues on my Shay which I now started to solve. So I cleaned up the work bench and lifted the Shay on top to work on.

First, the water valve for the injector tend to slip down and loose connection with the spindle rod. To avoid this in future, I simply installed an angle bracket to the frame which holds the valve in place. I spend some black paint after taking the photo. 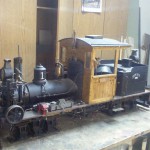 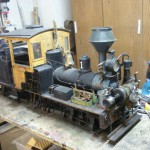 Next I replaced the screws, used to hold the parts of the winch to the frame board. I used 3mm screws instead of 4mm, which caused misalignment due to moving parts. This should not happen again. But I found that some bearings show some wear. They are simple brass bearings with steel axles inside… When I build the winch assembly some years ago, I didn’t spend so much time in such parts, as I didn’t know if the whole thing would work in the end. Once the wear will be to big, I’ll rebuild the whole thing to a better version with better bearings at all.

At least, I started isolate the steam pipes to prevent the steam inside from condensing and to keep condensed water out of the whistle, steam winch and brake system. I dismantled the steam pipes and wound 2 layers of yarn around them. The yarn is then painted with acrylic paint which is massaged into the fibers to get a smooth surface. 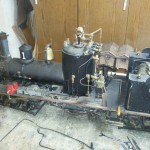 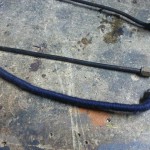 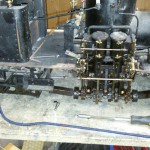 Finally it worked much better than expected and I finished the hole firmans side within 2 hours. The only steam pipe on the engineers side is the blower pipe, which wasn’t easy to remove at all. I had to loosen the steam engine and the lower boiler brackets to get the steam pipe out of the loco.

Another hour later, the loco was assembled back together and my hands have been dirty :-) The next steam up will show the improvement of the yarn twisted steam pipes… or not…

Posted by Gerd on Wednesday, 22 April 2015 with 2 Comments
in - Uncategorized, Workreports LVLC

Let’s get a new car look rusty, dirty and worn out in just an hour…

First I applied the lettering to the car. I ordered a set of dry transfers to letter my rolling stock in this scale. Not cheap, but one of the best ways. 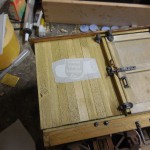 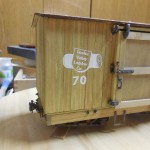 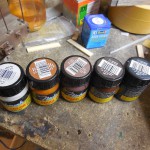 The last step in this project is weathering which will turn this new build car into the same worn out look as my other LVLC rolling stock. Therefore I use the 5 colors shown above, applied from left to right with an airbrush. 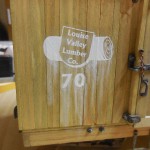 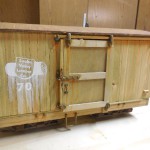 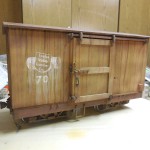 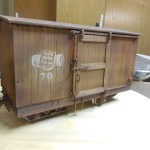 You can see the 5 steps in the photos above. I’m very happy with the finish and it matches my other rolling stock perfectly. I also weathered the new way car chassis and the water tank for my flat car at the same time. While my other cars have collected some dust during the past years, I used some saw dust to complete the “weathering” of the new car. 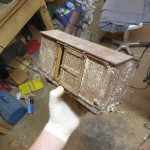 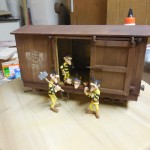 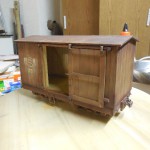 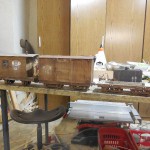 With Boxcar #70 done, another long time project idea is finally closed. Next project might be some maintenance work on my big Shay. But more about this, when there’s something to show…

Posted by Gerd on Sunday, 19 April 2015 with 1 Comment
in Workreports LVLC

My plan was to spend some more time for my Fn3 garden railroad trains when I tumbled into the Hon30 Molino-project. So let’s get back to larger trains… For a long time, I was looking for a boxcar to haul freight and supply stuff to the log camps on my little logging railroad. Since I […]

Good evening, I finished my Molino-Shay within the last couple of days. Since the body shell was mostly done, I spend some time to spend details to it like rivets on the tender tank, a trim along the top edge, piping and runboard supports. Once all parts were in place, I airbrushed the whole loco […]