BCL&RR Forney “Maggie” is in the shops…

Posted by Gerd on Thursday, 17 September 2015
in Workreports

after a long break, I’m back on my logging railroads, preparing the BCL&RR rolling stock for the next event in January. First project is a full maintenance to my Forney. She was not often in use during the past 2 years and has shown a number of issues. The engine is 32 years old by now and after all that time, some wear here and there is typical.

Back in May, I already replaced the boiler feed valves, since the old ones didn’t close proper. This was a big issue at the injector which got warm from the back floating steam.

Yesterday, I started with the valve gear. A first check last summer showed, that many bolts and bearings were worn out so the slide valve has up to 2mm play. I already realized that by less power and that the engine wouldn’t start in some valve gear positions. Due to the variations, the timing was very bad. The following video shows the valve gear before I start work (Sorry, German audio only).

So I dismantled the valve gear and added fine bushings to all points that caused problems. I also replaced the union joints on the valve rods. 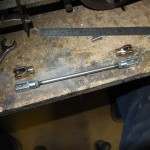 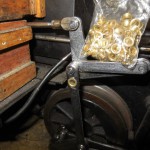 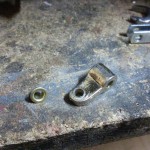 The bushings are of a soft material and may wear at first. They are easy to replace and I look forward how they will turn out on this job. I’ve some more in cushion. Well, after getting all parts back in place, the variations was reduced from 2mm down to 0.5mm. What a difference. The video shows the valve gear with the new bushings in place (Sorry, German audio only)

Next was to set up the valve gear. She still runs a bit jumpy, but this comes from the compressed air, used for the test runs. Under steam, the loco moves more even. Still bad is the fact, that the valve gear is only in forward direction 100% correct. Backwards, the timing is not perfect. As far as I could determine, this comes while the center line of the cylinders is slightly higher than the axles. This should be avoided by Marshall valve gear. Don’t be feared by the squeaky sound – this comes from the axle water pumps when running dry (without water). (Sorry, German audio only)

Anyhow, I’m happy with the result so far. The loco runs better than ever on compressed air. At least, the loco is running forward for 95%. Therefore I’ll set the valve gear for forward in major and reverse is good enough for usual operation.

Next I’ll do some “face lifting”, but I’m waiting for some special parts to get started.