[Hon30] operation session on the WBE

in the past days, I set up two different layouts from my Hon30 modules and ran some trains with different locos. I also tested the new Minitrains Controller and I’m very happy with it.

Here are a couple of photos, taken during the op-session. 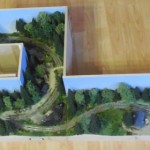 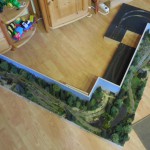 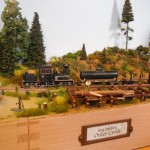 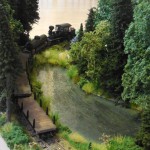 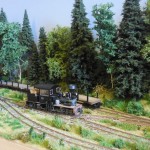 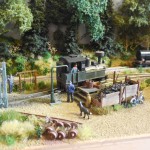 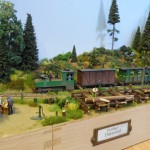 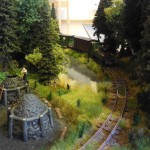 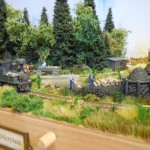 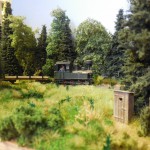 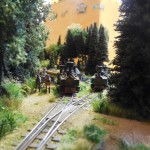 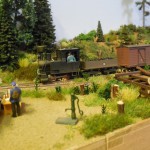 Posted by Gerd on Sunday, 29 November 2015 with 2 Comments
in Rolling stock

Once started, it’s hard to stop…

I got a Roco Feldbahn-Diesel of the newer batch from a friend. As common, this loco isn’t a good performer in original factory setting. The loco is to light and without any flywheel. So I removed the original motor, installed a Mashima 1020 with small flywheel and a lot of weight. Now she weights 53 grams, and is a good running engine. And she really matches nice beside the Roco steam loco I have. 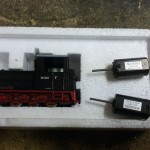 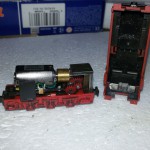 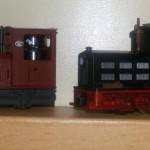 With the new locos, I also changed the concept within my loco fleet. The Waldbahn Eusserthal isn’t that big, that more than 2-3 locomotives are really needed. So I go and choose a pair of locos, which are used for a session, representing the full motive power of the logging railroad. This way, I can combine the Minitrains Krauss and Gmeinder, the Roco locos or the two Brigadelocos. This way it won’t show up, that the grade of detail and at least the scale isn’t the same between those models.

Posted by Gerd on Wednesday, 25 November 2015 with 2 Comments
in Rolling stock 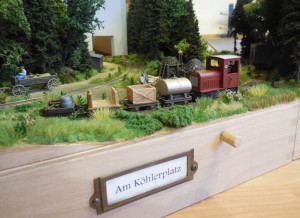 I got a loco for my Hon30 logging railroad. Once I got rid of the DCC stuff, I don’t need new decoders anymore, therefore it’s cheaper to get new locos into service. I couldn’t resist and invested some money in one of the great little Minitrains Gmeinder locos.

I choosed the maroon-red one and I love her. Shortly after delivery, the loco was seen near the charcoal square with a short work train. The loco will get weathered and detailed during the next weeks.

Posted by Gerd on Sunday, 22 November 2015 with 1 Comment
in Layout technique

Hello again, after finishing the preparations for the live steam show in January with my 2“-scale railroad, I decided to spend some attention to my Hon30 logging railroad during the winter time. There’s still a new module on my to-do list and some other ideas. First off all, I’ll start with a fundamental decision. I […]

Posted by Gerd on Tuesday, 17 November 2015 (Comments Closed)
in Workreports

Hello, I added the rivet detail to the new diamond stack. I used grooved pins to add the rivets and chiseled a groove beside where the two metal sheets would join in prototype. To drill the holes on the center ring, I used the round table on the mill and spaced them 10° appart. I […]

BCRR – lathe work on the new diamond stack is done

Posted by Gerd on Wednesday, 11 November 2015 with 1 Comment
in Workreports

Hello, after another 4-6 hours, the lathe-work on the new Shay stack is done. From 6.6kg aluminium, I got an 850gr disk (which I cut off on my bandsaw first) and a stack with 2kg. The other 3.8 kg were chips now… Anyway, the result looks very nice so far and I look forward to […]