today, I’ve an update on my Hon30 layout. As I decided to make a creek on the new segment, I had to found a way to model the water. After research on the internet, I decided to use products from NOCH, which are the same as Woodland Realistic Water and Water Effects.

First I added some stones from plaster pieces to the river bed and gave everything a coat of paint to give the basic structure to the creek. BTW, most creeks in the area I live are simple as this one and no rocky and whirling rivers. 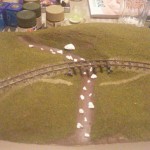 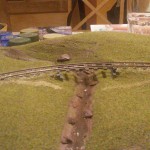 Next I applied the first layer of Realisitc Water. It’s important to follow the instructions. Each layer should be max. 3mm thick and needs to dry for 24h. During this time, it will shrunk by 50%. If you’re not sure how this material work, you might make a test piece outside the layout to learn how to work with this products. The Realistic Water is very thin stuff, so you should hold the river horizontal. With the second layer, I added some twigs and let them dry again. 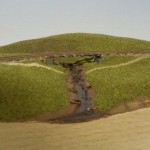 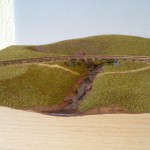 In the end, I worked with 5 layers which turned out to be the right amount of water in the creek. I added some wave structure with water effects where rocks and sticks were in the water. Once the vegetation around comes to the shores of the creek, this will look really nice.

Next I’ll complete the railroad bridge and place the trees. As you can see in the last shot, the background is also ready to be installed.

this week, we spend two days at the convention center at Karlsruhe to set up our 2″-scale logging railroad for the 2016 live steam show. As every year, we did some changes to the track plan and added some new structures and details. We got a new “industrial spur” for wood dump cars and we’ll get a very special new structure. But most details are still “top-secret” to feet the curiosity of the visitors :-) 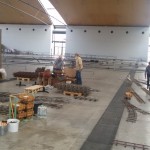 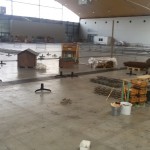 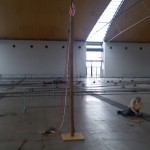 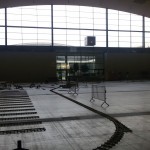 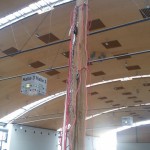 My dad, Jonas and Ralf supported me, so we could finish work within two days. We also did some changes to the turntable and some structures. Finally, the tracks and structures are all placed.

We also made some new wood structures from material, we found in a scrap pile from the previous event… 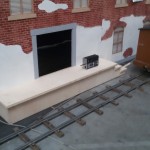 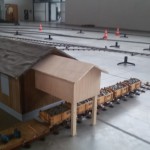 In January, we’ll do the last detail work in the days before the show, including the trees for the forests and all the fine detail stuff/scenes, to create a nice and charming backwoods flair.

Posted by Gerd on Wednesday, 9 December 2015 with 1 Comment
in Layout construction

in my last posting, I announced, that the setup work for the big live steam event will start this week, but I was wrong in date by one week. So I had some more time to do some progress on the new module of my Hon30 layout.

I sculptured the landscape with plaster and painted earth brown. I ballast the track in the common way with Woodland ballast, mixed from different colors and some fine turf. I also use a mixture of fine turf for basic ground cover before the vegetation is set. 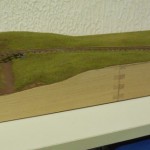 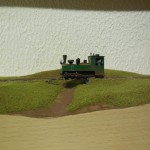 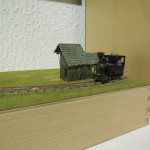 I also build up a Faller barn which got heavily weathered with paint before assembling. The bridge will get some timbers below the track, once the creek is finished.

[Hon30] Progress on the new module

Posted by Gerd on Saturday, 5 December 2015 with 1 Comment
in Layout construction

Hello, I did some progress on the new module during the past days. I added another scenic element to the module. The railroad will cross a small creek on the left part of the module. Therefore I made a cut-out to the deck of the Casani box. I glued a piece of foam below the […]

[Hon30] The new module get started

Posted by Gerd on Wednesday, 2 December 2015 with 3 Comments
in Layout construction

I spend the first evening working on the new module of my Hon30 layout. I made the module from two 20x30cm Casani boxes and glued/screwed them together for a 60cm long module. Next I installed the plugs and sockets, layed the tracks at the module joints and did some tests with the existing modules. I […]