Posted by Gerd on Thursday, 25 August 2016
in Garden Railroad

While I’m working on my trolley layout, I’ll show you some other updates in between from my Fn3 garden logging railroad.

The livesteam and the Bachmann Shay were actually in service, but there were two more locos on my roster. Together with the Bachmann Shay, I also got a Climax for the same railroad, but I sold her some years ago. Now I got the chance to get her back into my collection, so both locos were united again. The Climax needs some restoration, because of damage during shipping and I’ll replace the outdated battery-power-system with a new one similar to the big Shay. I’ll also add sound to the Climax. 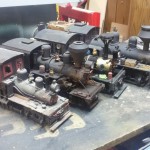 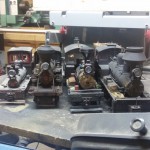 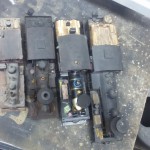 To the far left is a very small Shay, which was my personal second Shay ever (unfortunately, the first one is lost). I got a box with parts of a KTM Shay in 1:24 scale, which was hardly damaged. I had to spend a whole new frame and drive. Later I replaced the cab to make her matching to my 1:20 rolling stock. Anyhow – I decided to bring her back to live after a break of 10 years, resting on top of a showcase in the living room. I already removed the old batteries and will repower her with modern Lipo batteries and a simple control system, but no sound. At least, she’ll be a very small Shay beside the bigger ones, but there has been such Shays in real too.