Hello, now the loco is ready for radio control!

It took me some time to figure out how and where I could place the servos for the radio control. Finally I found the solution by getting rid of the Johnson bar and turning the reversing-servo upside down. 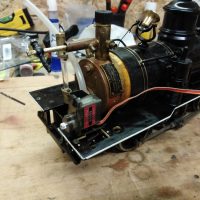 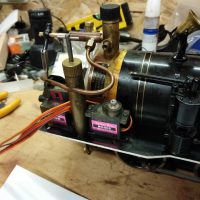 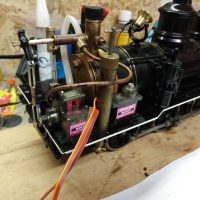 The regulator servo is placed upright and is mounted in a self-made bracket, bend from sheet steel. The lever is sticking out from the back of the cab, but this is okay. It allows more clearance between the servo and the boiler. Left of the lubricator is the reversing servo, which got installed upside down. The third servo to the right is for the whistle.

As there was no space left for the receiver (the gas tank will take place on the firemans side), I moved him to the tender as well. The nine wires of the servos were wrapped in some heat shrink and led under the cab floor in-between the frame. 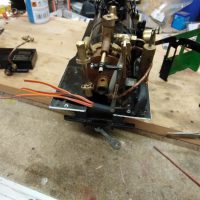 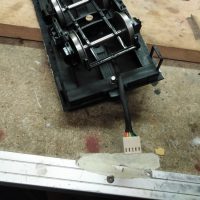 Here I installed some simple PBC with a 5-pole socket and I combined all red wires to pin 1 and all black wires to pin 5, while pins 2-4 are used for the orange signal wires. The tender got the matching cable with plug at the end.

To connect the cable with the receiver, I installed the typical plugs at the ends. So it’s easy to change channels if necessary. At least I installed the power switch and made a battery pack ready. Usually I install a charging socket as well, but I won’t carry the large loco to the charging station each time. So I made the battery pack removable by plug & socket. 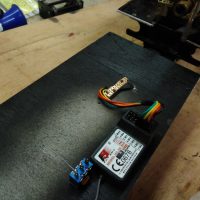 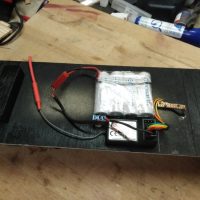 Well, now it’s time to make some progress on the loco.

On top of my list was the water gauge. These early Accucraft locos didn’t have water gauges and since I couldn’t get one in short time, I decided to build my own water gauge from brass and the spare glass tube of my Resita loco. The base was turned on the lathe from brass stock. Once the basic shape was given, I drilled all the holes needed. 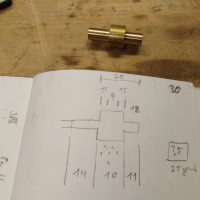 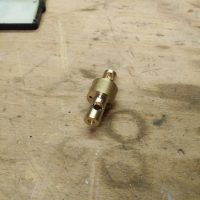 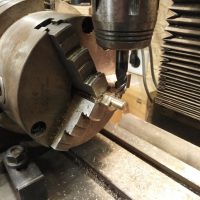 The thicker part in the center was than milled to some elliptical shape. Next I made the threaded parts on the lathe and silver-soldered them in place. Once sandblasted, the parts are looking very nice.

The center part was calculated long enough to cut the single part into the top and bottom piece as well as the into the glands which will hold the O-rings to seal the glass tube. 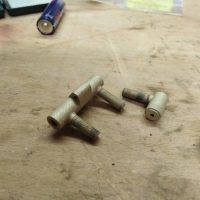 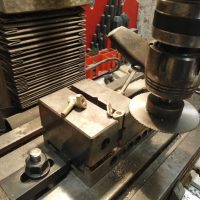 To mount the watergauge at the boiler, I need some elbow, which was made the same way.

Before the boiler was mounted back on top of the frame, I decided to place the whistle inside the frame. Originally, I was looking to install one of these nice resonator whistles, but I couldn’t manage the space inside the cab. Then I remembered some old unused whistles from my 5″-gauge locos and the “short” whistle fits very nice into the frame. I just had to cut away some sections of the firebox shell. 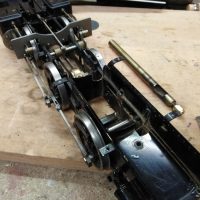 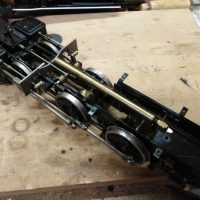 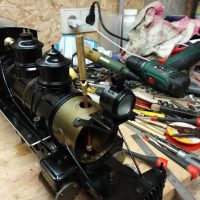 Once the boiler was back in place, I started to add all the other parts. When the threaded section of the exhaust pipe cracked off, I decided to spend some more action here as well and made a homemade chuffer.

And now it’s time to get the RC components installed – see you next week ;-)

Posted by Gerd on Tuesday, 15 January 2019 with 1 Comment
in Garden Railroad

I couldn’t stop working on the tender so I continued with the tender body. I sandblasted the tender shell to remove all the paint. This makes any soldering action easier and allows some changes to the tender design. The paint was very sticky and it took me some while to get it off. Parallel to the sandblasting, I painted the tender frame, and let the paint rest to dry. 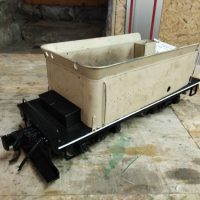 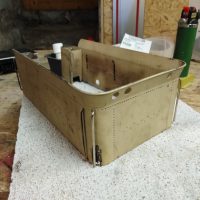 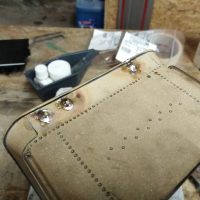 On the tender, I relocated the rear hand rails from the side, into the bend, just as on the front end. First I soldered new rails in place, afterwards, I snipped the old ones off and filed them flush with the tender shell. Before that, I un-soldered the tender brackets, which will get relocated as well, while my tender frame is narrower then the original one.

Another task was to fill in the holes in the tender shell. I mad small plugs on the lathe and soldered them into the holes. Then I sanded them flush with the tender shell on both sides. Once these are sandblasted and painted again, they wont be visible. 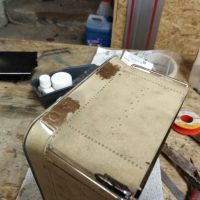 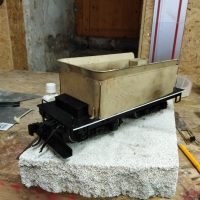 The fixed tender body does look much better now. As the inner parts of the original tender were no longer useful, I removed them and decided to install a wooden interior to the tender. But before that, I made two new brass sheets to cover the front deck of the tender tank. Here you can see the tender brackets back in place at a right angle to the tender ends.

As said above, the new tender interior is made from plywood. I epoxied two blocks of 1/2″ plywood at the far ends into the brass shell. Later I added the top from 2mm plywood. 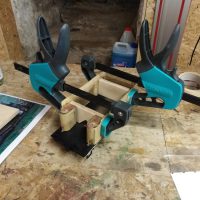 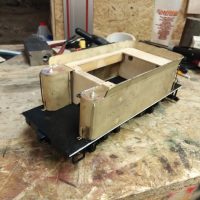 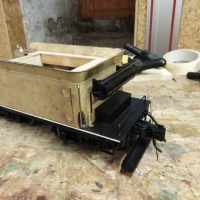 The whole wooden part will be hidden by the coal bunker above, so I’m happy with this solution. At the rear end of the tender, I placed the air tank, which was originally located under the cab. I use several Colorado & Southern Moguls for inspiration on this project. There are still lots of details missing and paint off course.

Posted by Gerd on Tuesday, 8 January 2019 with 2 Comments
in Garden Railroad

Hello, as announced last week, I did some work on the tender. My first plan was to rebuild the original tender frame but I got to the conclusion, that it might be much easier to build a new frame from wood instead. The new frame is longer and narrower than the original one. I’ll go […]

Posted by Gerd on Wednesday, 2 January 2019 with 1 Comment
in Garden Railroad

The new year has just started and here’s the first progress report. I modified and reinstalled the original brake rigging to match the new wheelbase of the chassis. Since there’s plenty of room below the cab where the rear driver was original located, I made two typical brake cylinders from brass and mounted them to […]