All about my Fn3 scale garden railroad

Posted by Gerd on Tuesday, 10 March 2020 with 3 Comments
in Operation Sessions

last weekend, Shay #6 headed out into the woods with a short MoW train. After the winter break, the MoW crew was looking for bad spots on the main line which will need repairs before the new season will start. Fortunately, there are only small issues along the tracks. Additional, the track gang made surveys for new track extensions which might be build this year as well to reach new stands of fresh timber. So stay tuned for later updates during the year. 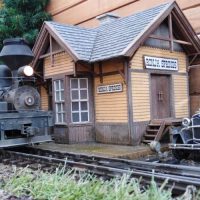 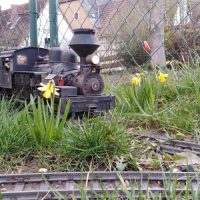 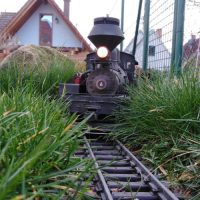 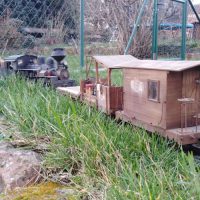 When the train returned in the late afternoon, the Shay was turned on the wye before heading down to Ronja Springs.

Posted by Gerd on Tuesday, 4 February 2020 with 4 Comments
in Workreports CFF

Welcome back to the last chapter of the Krauss loco for now.

First, I uploaded 3 more photos showing the loco under construction in total. 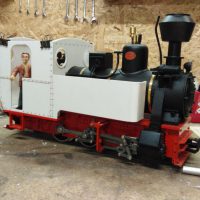 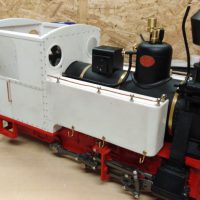 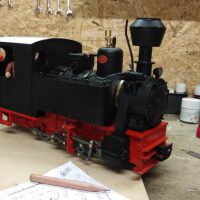 Before I glued the plastic sheets together, I sanded each of them on both sides, to get a good surface for the paint. I used spray cans on this project for most parts. Once the new build cab and water tanks were permanently attached to the boiler, I could start with all the small details along the boiler top. There I added the water feed valves and piping as well other steam lines and details. 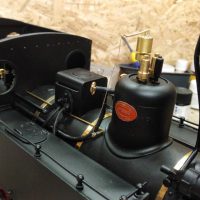 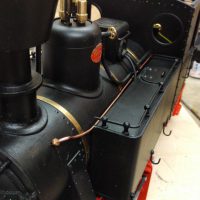 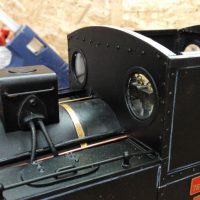 The inside of the cab also got some details. I installed a wooden floor and added firewood and loco crew. The windows got glazing as well. 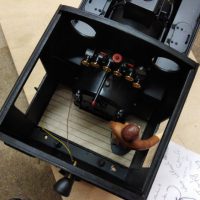 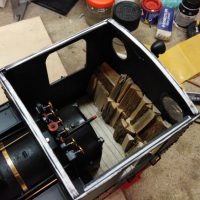 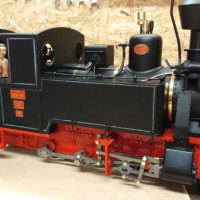 All loco plates are etched brass and I ordered them custom-made. The builders plate is from a set for an Austrian ‘U’-loco. The white trim on the body is simply made with a white pencil by using a ruler. This worked out well on my Resita.

Another typical detail on such locos is the hose & pump to take water from creeks or ponds to fill up the water tanks. On this loco, it’s possible to connect the hose to the pipe and lay it out to the water source. This may create some nice photo scenes in future. 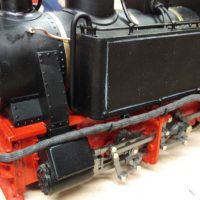 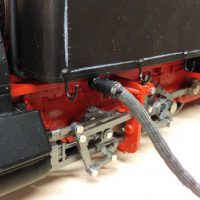 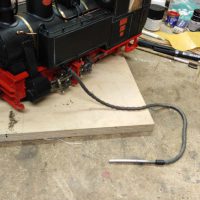 Last big part was the roof, which is glued on top of the cab to add more stability to the super structure. Final detail parts were the injector under the cab. I ordered brass parts for live steam model detailing, as I couldn’t find any other good-looking parts. And I’m very happy with the result.

The last photo for today shows the loco opened up. The battery is hold in a small box inside the boiler. The body shell is hold down by three 10x10mm Rare-Earth-magnets, which held both sections well together. It’s even possible to carry the whole loco (approx 6lbs) on the cab, but since the crash of my Resita, I don’t experiment too much. Right below the smoke box are three spring-loaded contacts (LGB wheel pickups) which are used to transfer power to the head lights. They will connect to the PC-board inside the smoke box and there are no wires between the chassis and the body shell. 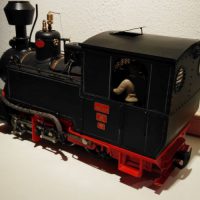 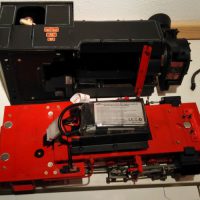 Until today, I didn’t find the right mood to airbrush-weather this loco, so she’s still “fresh paint”. But I look forward to make her “realistic looking” within the next month and to finally add all the small bits and details, which are adding so much to the Romanian logging steam locos.

Let’s continue with the second part. As already written in the last week, I had some trouble regarding the battery pack. Finally, two separate ideas solved this issue. The whole body shell, including boiler, water tanks and cab, will be one unit, which can be lifted from the chassis. This will give access to the […]

Posted by Gerd on Tuesday, 21 January 2020 with 4 Comments
in Workreports CFF

In early 2019, I bought a used „Frank S.“ loco from LGB on eBay to model the HF110c loco of the French „Abreschviller logging railroad“. But soon I realized, that I was going to spread myself to far into different railroads topics, so I canceled the project just right in time. But what to do […]

Posted by Gerd on Tuesday, 12 November 2019 with 3 Comments
in Workreports CFF

Well, the car is done… And as in the first part, I don’t have photos of the building steps. If you’re interested in details, feel free to ask! Once all the brass profiles were applied, I brush painted them black. The window framing got glued onto the plastic window-glazing first and the whole windows are […]

Posted by Gerd on Tuesday, 5 November 2019 with 2 Comments
in Workreports CFF

After a short break, I’ll show you some progress on my next Moldovita based car. The line used a small 4-wheel caboose on their log trains and I always had a special favor for it. At least for its small size and octagonal body shape. I checked my scrap box and found some 26mm wheelsets […]

[CFF] live stock on the railroad

Posted by Gerd on Tuesday, 15 October 2019 with 2 Comments
in Workreports CFF

This week, I’ve just a small project. Many logging railroads were used for much more as hauling logs. It also brought loggers and other “passengers” into the woods as well as food and supplies to the camps. But sometimes, they also worked simple as a “common carrier”. Along my logging empire, there are some fresh […]

Posted by Gerd on Tuesday, 8 October 2019 with 3 Comments
in Workreports CFF

Here comes the second part of this small tender car. As announced last week, I spend a sand-blast and painted the body black. Once assembled, I soon realized, that something went wrong with proportions in height. I checked some prototype photos and soon found out, that the roof on my car is 6mm to height. […]

Hello my friends, many Romanian logging railroads used wood to fire the steam locos and since wood has a lower fuel value as coal, many locos used aux. tenders to enlarge the fuel capacity. For my railroad, I choosed the small 4-wheel tender used at the Moldovita forestry line. The prototype was rebuild multiple times […]

Posted by Gerd on Monday, 23 September 2019 with 1 Comment
in Workreports LVLC

Hello, during the last months, my Louise Valley Lumber Co. acquired two 3-truck Shays for heavier log trains. Originally, both were “oil-burner” and got defined to be the “2nd generation” of motive power at the LVLC. Later, I converted both to coal-burner as I like the look of Shays with diamond stacks more than the […]