All locos run on DC and got weathering and detail parts added.

Steam locomotives of the WBE

Most locos are from Minitrains, except for the classic Roco Feldbahn-locos. The Roco-units got equipped with coreless motor by sb-modellbau. 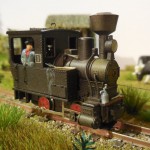 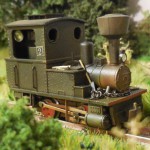 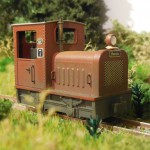 The tiny 13ton Shay is a rare brass model made by Sugiyama in Japan. It features a fully working drive shaft which actually powers the wheels. A real cute gem and it’s a joy to watch this loco crawling over the layout with its own american charm. 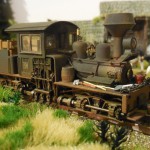 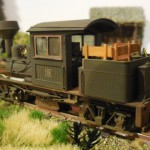 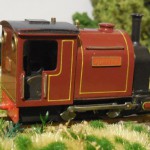 The little Welsh saddle tank loco was made by Brian Caton in England. It’s a real live steam loco, burning methylated spirit. With a boiler fill of water, the loco runs for 8-10 minutes. It can run in both directions and hauls even heavy trains on scale-speed.

More about this loco can be found here -> 009-Livesteam