Posted by Gerd on Sunday, 27 April 2014 with 1 Comment
in Workreports LVLC

I did some modifications to my Accucraft Shay during the last days. Since last year, I had a steam whistle in my box and now I added her to the Shay. We had to reconfigure the RC so I also installed a LED to the headlight.

The old Accucraft Shay has no free place to mount a whistle valve on the boiler. So I made a T fitting from brass and installed the valve together with the pressure gauge. I replaced the lever on the valve for RC. The whistle itself was placed beside the boiler and below the run board where the steam brake cylinder should be. The 3mm pipe was bend around the gas tank and I cut a slot to the runboard to lead the pipe through it. This was easier than a big hole were the union nut would fit through. 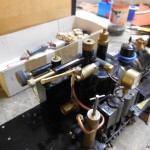 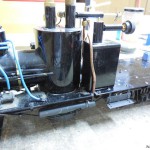 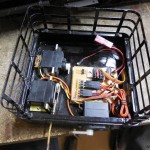 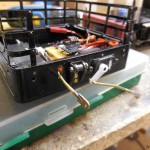 The Servo for the whistle valve was placed in the water tank where the other RC components are already installed. The valve is connected with a fishing line, so I added a roller to guide the line. The parts are made from brass stock.

BTW.: The 2,4GHz-RC components are developed and made by my dad and they are working fine. I can control the speed (steam valve), direction (reverse gear), steam whistle and the head light. All RC components are placed in the water bunker and are protected from water and oil.

Structures for the logging railroad

Some weeks ago, I spend one night on building up the structures for my little logging railroad. They were built from plastic kits made by Vollmer and Faller.

As usual on such plastic kits, the parts needed some coloring touches to make them look more realistic and less toy like. I use drybrush-technique with different colors for this job. By adding multiple layers of color, you can create the look of weathered wood very easy. 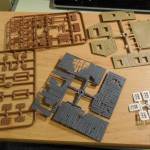 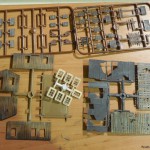 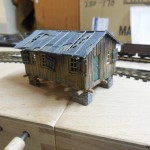 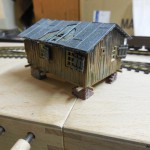 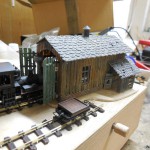 Once the paint was dry, I assembled the structures as given by the instructions, but I got rid of the foot plate. Those were nice for toy train layouts. On ma model train layout, I’ll place them directly to the modeled landscape.

Yesterday, my parents started the BBQ season and we were invited for dinner. I brought my Fn3 log train and we run the train a couple of laps on the garden railroad.

The Shay performed good, but I had some issue with the gas inlet valve. I couldn’t get the tank full enough to get more than 1 lap before the gas was empty. I also may adjust the burner since the flame is burning to long. Anyway, I’ll go to add a whistle soon together with LED head lights.

The next operation is dated for easter saturday. 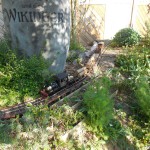 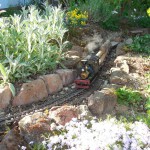 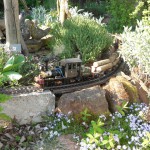 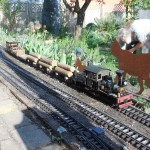 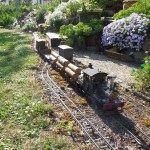 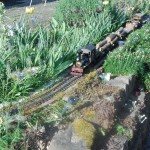 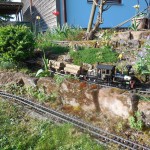 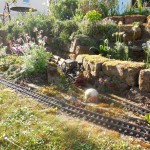 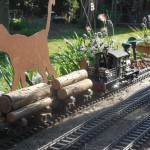 To run my H0n30 rolling stock more than just a two feet, I made a temporary loop extension, based on a wooden board. I made a cut out where I can add my first module. On the board, the tracks are extended to a loop with a fiddle yard made from old N-gauge section tracks. […]

Today I like to introduce you to my little WBE steam loco #1. It’s a Krauss build 0-4-0 which will be named “Eusserthal”. She represents the first loco of the logging railroad, sill in service today. The model was made by MinitrainS and is a real nice locomotive. The drive mechanism with flywheel makes this […]

The pages about my Shay collection are online

Posted by Gerd on Friday, 4 April 2014 (Comments Closed)
in - Uncategorized

Hi folks, I just added my Shay pages about my collection, stories and some generall background about Shay locomotives. You’ll find the pages in the top menu. Cheers, Gerd

Once I got my first module ready for test runs, I made some movie clips of my rebuild Joe Works Shay. She runs a bit noisy due to the high rpm and lot of brass gears. But finally she’s a good runner and I really enjoy the prototypical top speed.

Posted by Gerd on Tuesday, 1 April 2014 with 2 Comments
in Layout construction, Layout technique

Yesterday, I added the turnout mechanism and wiring to the backwoods terminus of my little Hon30 logging line. Now I’m able to run my little steamers for some switching. The turnouts are operated by under floor mechanical mechanisms made from 4mm steel rod, simple switches and electric screw joints. One of the screw joints holds […]