Posted by Gerd on Wednesday, 29 October 2014 with 4 Comments
in Operation Sessions

here’re the photos of the finished segment as announced in the last post. 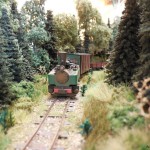 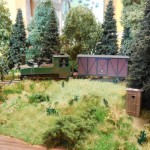 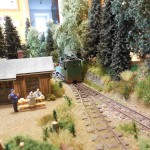 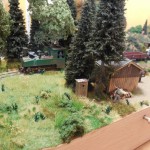 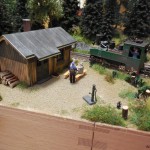 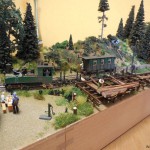 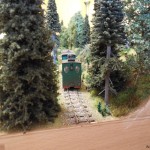 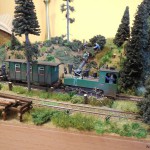 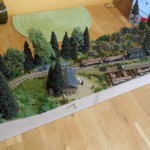 Beside the log landing, there’s a cutting area and a small station building for the loggers and their equipment.

Final touches on the last segment

it’s mostly done. I spend some hours today on adding grass and plants zu the last module of my layout. I also added some more figures and details parts. 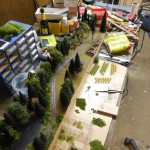 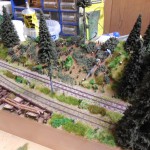 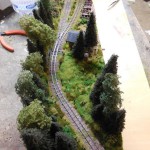 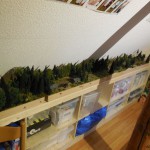 Sadly, the light was to bad this evening for good photos. I hope I can make them next week together with some photos of the over all arrangements. I added a sneak preview in this post. I’ll also make some new videos.

I get closer fo the final steps on my last module of the Hon30 layout. I raised the log landing platform with wooden strips, cut on a micro table saw. From this platform, the logs are rolled over the fold down stacks of the log cars on top of them. Once the lower logs are in place, thick branches are leaned against them to roll the next logs on top of them and so on. 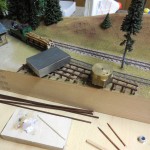 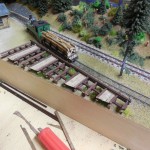 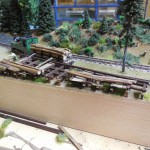 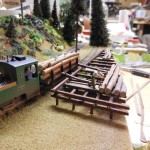 I’ll add some more plants, grasses and other scenery parts to this scene during the final touches. During the construction, I just had a look for the sections below the platform.

In the background, I created a cutting area where most trees are already gone. Just a bunch of stumps and brushwood has remained. One of the trees is actually in progress by three loggers. 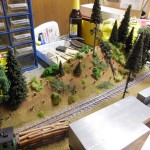 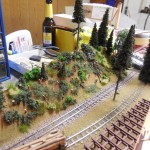 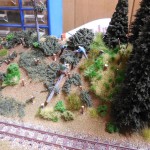 The ground scenery is mostly done on this area, but I’ll some of my typical plants during the final touches. The progress of today brings me y big step closer to the end of this project. By finishing the vegetation, just a few detail parts and scenes are missing and last segment will be done as well.

Hello, today I spend 2 hours on my last segment of the Hon30 layout to get some important progress done. First I colored some stones of the bicolor retaining wall to make her look more realistic. I’ll add greens and vegetation later to finish this scene I guess it will become very nice. In front […]

The Hon30 locos for my logging railroad are done !!!

Posted by Gerd on Wednesday, 15 October 2014 with 2 Comments
in Rolling stock

Hello, yesterday I finally finished the Hon30 steam locomotives of the WBE. I spend an airbrush weathering to the locos and added a lot of clutter, detail parts and other stuff, which is typical for such logging engines. Larger photos of all locomotives are now also shown on the following locomotives page which is also […]