Posted by Gerd on Tuesday, 2 June 2020 with 3 Comments
in Waldbahn Gazette

Are you in trouble and need good arguments for your honey, why garden railroad trains are useful and handy? Well, here’s a genius life-hack for you:

Well, it’s finally a joke to fill a gap here in my blog. I’m working on some bigger projects recently and didn’t find the time to write new postings for the blog yet. But I’ll please you with some 20+ minutes of video coming soon. Promised ;-)

Posted by Gerd on Tuesday, 26 February 2019 with 1 Comment
in Waldbahn Gazette

today, I’ve another issue from my “Waldbahn Gazette”, featuring the amazing “Waldbahn Horský Dolina”. I found this railroad some years ago in a German model train forum (Stummi-Modellbahnforum) and this layout was a great inspiration for me to build my own logging railroad in the garden. The layout and rolling stock is built by Tobias and he wrote the following in the forum:

In an unused corner of our property, I build a small “operation layout” for my garden railroad trains. As I’m interested in logging and industrial light railroads, I decided to build a logging railroad. The scale is defined as G-scale, running on 45mm track and uses rolling stock in scale between 1:22.5 and 1:19. While the space was limited and the layout mostly planed to test new rolling stock, I used R1 curves, which I might not do again on future layouts.

Based on the topography of the garden, the railroad hauls logs from a high plain down to the sawmill/reload station. Especially on the lower station, the space is limited, so there are only a few tracks and trackside structures. The station only features a runaround track, a long reload siding as well as the engine shed and a short spur at the end of the line. Leaving the lower station, the track runs uphill in a big loop with a 1:10 (10%) grade. The first loading spur at the top of the grade got abandoned some while ago.

The new loading station is designed for future expansion of the railroad. As seen on some logging railroads, I like to operate trains from this station, which pushes empty log cars to the final loading places in the woods.

Well, here are some photos and a track plan. More photos and build logs are posted in the origin forum thread at Stummi-Forum (visible without login). 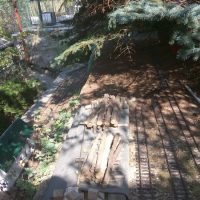 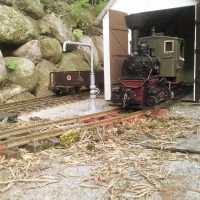 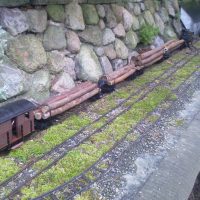 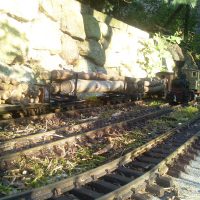 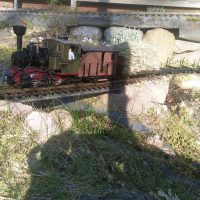 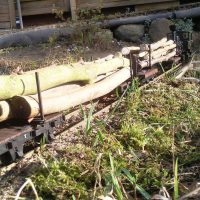 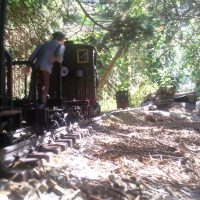 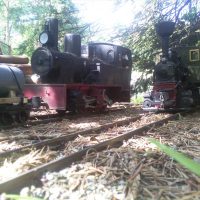 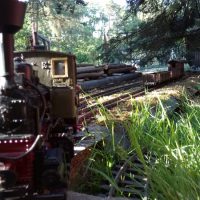 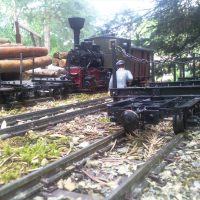 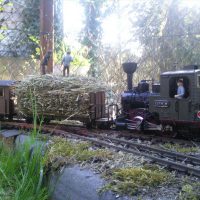 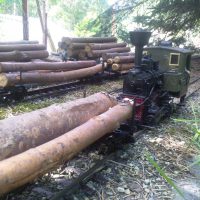 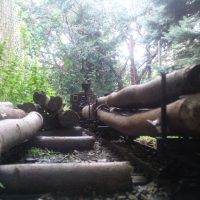 Hello, I got some mails last week regarding some more information about my old N-scale rolling stock modelled after the famous West Side Lumber Co. Since the original website has gone, here are some photos of the model I build back in time and which all got sold away some years ago. Two make the […]

Posted by Gerd on Tuesday, 25 September 2018 with 1 Comment
in Waldbahn Gazette

Hello logging railroaders, at the moment, I struggle with some issues on my garden railroad project. It seems that I have just to many different projects and ideas going on, and I’ve to sort them out in those I can realize on my railroad, and those I should try to stop before it’s to late. […]

Hello logging railroaders, at a model railroad show in Mannheim in January, I meet Daniel from Mannheim, which has watched my videos on Youtube about my Hon30 logging railroad modules. He was fascinated by the concept and design and told me that he’s going to build his own railroad soon. Now I’m happy to show […]

Posted by Gerd on Tuesday, 10 April 2018 with 3 Comments
in Waldbahn Gazette

Posted by Gerd on Sunday, 26 November 2017 with 2 Comments
in Operation Sessions, Waldbahn Gazette

Hello again from the smaller Hon30 railroad, in spring this year, I showed some layouts from other model railroaders, which were based on my design of the WBE. Bernd Iron copied my entire layout with some additional segments, and gave it a totally different look. Yesterday, he came for a visit and brought some of […]

Posted by Gerd on Monday, 20 March 2017 with 1 Comment
in Hon30 logging, Waldbahn Gazette

Hello loggers, three years ago, I started my Hon30 adventure which became later the “Waldbahn Eusserthal”. Time for a small review, starting with some photos from the beginning. But my review will not focus on my own layout. Instead, I’ll show you two copies of my idea/layout build by other model railroaders. Since I started […]