Live steam in 009 ?? Some may think this is impossible, but Brian Caton from Great Britain has made more than 50 live steam locos in 4mm scale, most of them in style of this little gems, an 0-4-0 Welsh saddle tank loco. 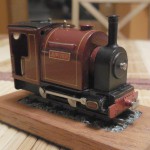 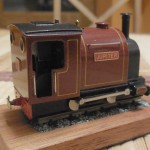 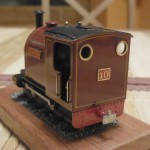 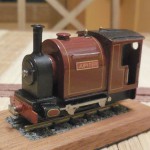 I found this loco on a steam convention in January 2015. I saw them before and I even did some research on buying one, but they are pretty rare. As I got the hint that this one is for sale, my decision was pretty sure within some minutes. Now, even my smallest logging railroad features a live steam locomotive. 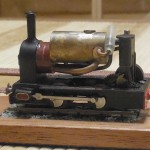 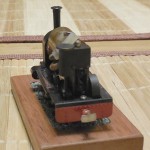 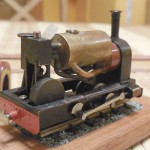 The technique in this loco is some kind of clock-makers precision. The engine is powered by a single cylinder steam engine with piston valve, mounted inside the cab. A slip eccentric allows operation in both directions. The boiler will take 1,25cc water and is fired with 0,6cc spirit by a wick burner. The engine works with super heated steam and doesn’t spill any water or oil to a layout and can be operated on each 9mm gauge railroad (except for the uninsulated wheelsets).

The following video shows the steam-up and operation of the locomotive on a simple test track on the kitchen table.