A new motor for the Climax

Posted by Gerd on Sunday, 23 November 2014
in Rolling stock

I made a list of To-Dos for my new Flying Zoo Climax. One of the first points was, to replace the open frame motor by a coreless motor. I got some 1016 Faulhaber motors on ebay for cheap money.

First I took the shell of what is very easy if you know where the screws are. Since the gear tower and motor holder are screwed together with the motor, it was necessary to make an adapter for the new motor. This adapter was cnc milled from 1mm brass and glued to the front of the motor. 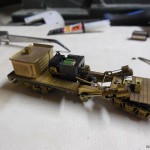 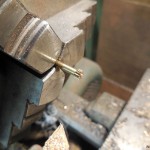 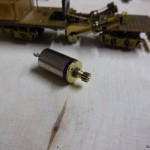 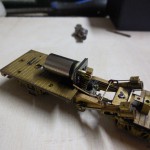 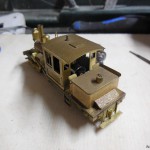 The next challenge was the different diameter of the motor shafts. The new one has 0.8mm while the gear has a 1.5 bore. I used 1×0.1 and 3x1mm brass tube and made an adapter. The gear was pressed on the shaft adapter and this assembly to the motor shaft. Since the new motor is a bit longer than the old one, I had to remove the tender tank to install the new one.

I hoped to get the whole engine quieter by replacing the open frame motor. In the end, the “sound” is mostly the same. Most of it comes due to the brass construction and the whole gear drive. Anyway,the loco runs very smooth with the new motor in place. The video below shows test runs before and after the motor change.

Next is to regauge the wheelsets to get the loco running on 9mm track.