“Out of chips” – cutting a diamond smoke stack from solid

Posted by Gerd on Saturday, 31 October 2015 with 1 Comment
in Workreports 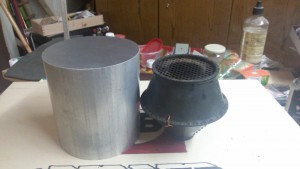 When I was at our club layout in with the Shay last August, I dropped the diamond stack by mistake and it broke apart. The original one was made from simple iron sheet metal and due to heavy rust around the soldering joints, there is no way to repair it.

So I captured the idea of Kozo Hiraoka, described in his books “building the Shay”, how has made the diamond stack from solid material. I bought a 6,611kg aluminium block to make a new diamond stack for my Shay. It measures 14cm in diameter and is 15cm long. First I cut it down to 13cm on the band saw, then I chucked the raw piece to the lathe and started work… 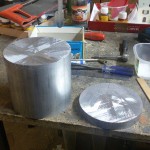 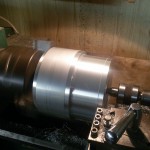 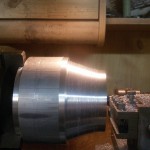 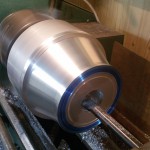 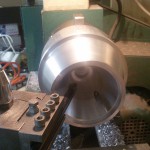 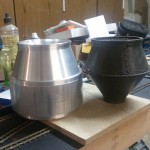 Meanwhile, round about 60% are done. I shaped the top tapper and bored the stack hollow. I don’t make it full hollow as the prototype, just enough to have place for the steam to escape. With the top half done, I can chuck it reverse on the lathe and start with the lower portion. It took me 3 evenings for the first set.

Once the lathe-work is done, I’ll add some detail rivets to completed the look of the new stack.

BCRR – Testrun of my Forney after overhaul

last sunday, I was at our club layout for the season close steam up and tested my Forney after the overhaul of the last weeks. The loco runs well and the maintenance of the valve gear shows good results. Anyway, I found 3 issues that have to be done as well. 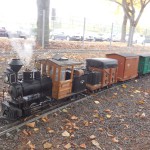 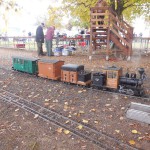 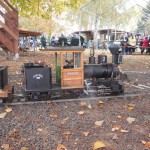 The steam valve for the injector is leaky, the oil pump delivers too much oil and at least, I’ll spend some attention to the blower needle in the smoke box, since the set up (original TJV) seems not to match perfectly. I hope to get the boiler working better with a proper set blower system.

Posted by Gerd on Saturday, 24 October 2015 (Comments Closed)
in Workreports

as I was lifting the Forney from the workbench down to the floor, I recognized that the trailing truck was loose on the mounting bar. I fastened all screws and I removed the pivot point on the truck, so the only pivot point is now at the front end of the drawbar.

This may result in better performance on curved track. I’ll check this tomorrow on our club layout. 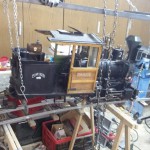 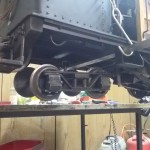 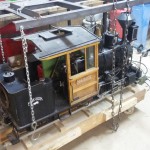 BCRR – Forney “Maggie” back in service

Posted by Gerd on Monday, 19 October 2015 (Comments Closed)
in Workreports

The new 5″-gauge tracks are done

Posted by Gerd on Sunday, 4 October 2015 (Comments Closed)
in Workreports

Hello, I spend some more hours yesterday to finish the new 5″-gauge tracks. Over all, I made 8 curved tracks, 3.8 meters radius and 22.5° each as well as two curved segments with 11.25° and 4 straights with 1.5 meters each. While the welder was cooling down, I cut some boards into wooden ties and […]