BCRR – Forney “Maggie” back in service

Posted by Gerd on Monday, 19 October 2015
in Workreports

after maintenance, the Forney is back in service. I spend another afternoon on optimizing the valve gear timing and after some good hints and correcting some errors, The loco is now running better than before. The following video shows a test run on compressed air. Renewing the valve gear bushings and correcting the errors have improved the running very well. Let’s see how this will work under steam when the loco is steamed up the next time.

With the valve gear issues solved, I could finally start with the last remaining part – adding a sand dome. I showed the 3D-printed dome saddle some posts ago and now I added sand pipes form 6mm brass tube and a some from 60mm round steel which I had on hand. 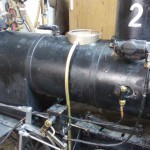 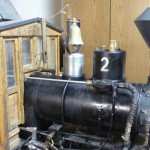 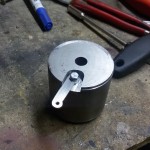 I milled a pocket to the bottom to add the lever from flat bar. the dome is hold in place by a saddle which is screwed to the boiler wrap. I placed the bell on top of the sand dome as it can be found on several prototype engines. 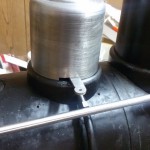 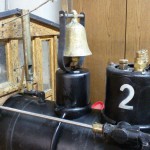 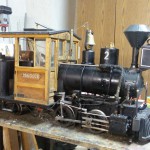 Now the loco is done for the next steam up which may happen next weekend. At least, I’m very happy with the new sand dome. It just completes the look of the loco.