in the past days, I made good and important progress on the Shay-repair. Since I disassembled the loco and steam engine together with my dad a couple of days ago, I fixed the main machine bracket by silver soldering. I found the original drill- and alignment jig of the bracket, so I was able to adjust it back to its original form.

Next I removed the bend section of the crank shaft, after disassembling of the steam engine. Since the crankshaft is made from single sections, it was easy to take her apart. Before I made a new part, I took the original one to the vice and spend some hard hits with a hammer. Guess what, I was able to bring the shaft back in its original form. This way, I could use the same part again. Otherwise I would have to drill new holes to align the eccentric disks on the shaft which would be much more work. 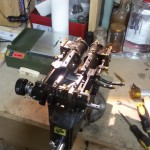 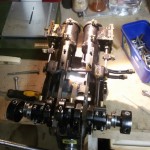 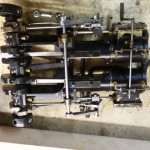 While I repaired the steam engine, I also did some improvements. I replaced the lower bearings of the drive shafts with ball bearings and renewed the piston seals. I also changed the piston rod seals. Once the cylinders were overhauled as well, I started to reassemble the whole engine step by step. In between, I made a short test run with compressed air, just to check if the steam engine is working well. Once the steam engine was assembled back together, I installed her back in place on the steam loco with all connections. 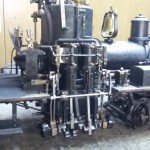 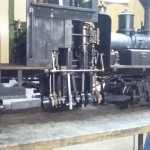 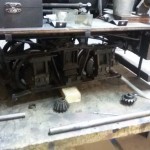 Last step was to install the drive shafts between the trucks and crankshaft. While the front square shaft was broken during the derailment, I silver soldered the head back to the shaft. Once finished, I made another test run with compressed air and all looks well so far. At least, I spend some attention to the rattling-areas. I renewed the drive shafts in the trucks since I’ve used the old ones which were worn out by the needle bearings. The gear-mesh wasn’t perfect as well, so I made new shafts and installed them in the trucks.

I reassembled the whole loco and as you might have seen already, the locos cab got a nice coat of black paint as well. In my opinion, this is much more prototypical than the original version of my Shay loco. 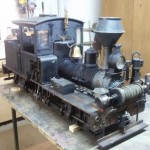 Last remaining work is to overhaul the mechanism for the lubricator. The rods were worn out and doesn’t drive the pump. But this is just a smaller fix I guess.

At least, the derailment had some good benefits for me. Some issues and problems came up during the repairs, which I might not have realized in the next couple month/years… I look forward for the first steam up to see how the loco is running after the repair and improvement work.