Posted by Gerd on Saturday, 16 July 2016
in Workreports

Since I redesigned my steam locos, I decided it’s time to spend some attention to the riding cars behind as well. Both riding cars are equipped with a water tank and are used to ride behind the locomotives to operate them. I originally designed them as logging-based equipment. I had to replace the trucks on the shorter “Water Car” some while ago and the wheelbase of the new trucks was a bit to long for the car. Since the other riding car had trucks with shorter wheelbase, I swapped the trucks between the cars and did some cosmetic restoration to the car body of #1. 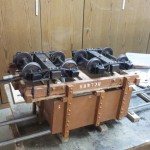 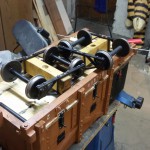 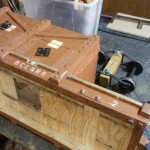 By just changing the trucks, riding car #1, which usually goes along with the Shay, was ready and got out-shopped within one evening. I decide to keep the old lettering on the “logging-only” equipment. At least for the moment. The car body of riding car #2 got torn down for all the hard ware and screws. There were several reasons to build a new riding car. First of all, the frame of #2 broke one year ago and got only “fixed-to-roll”… And the block & fuel car design doesn’t match the new “lady in black”-Forney with a passenger train. 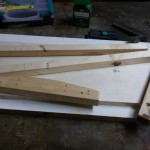 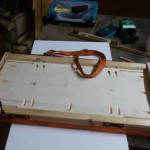 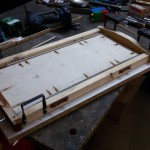 The new riding car will be shorter in length and use the longer-wheelbase-trucks. First time, I used a solid base board between the frame sills. This will make the frame very sturdy and mounting the trucks should be much easier. The wooden parts were glued & Screwed to the base board. All hardware is “second-hand” from the old riding car, the Forney (backside foot boards) and others. Where ever possible, I try to reuse parts to keep the costs down. 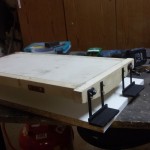 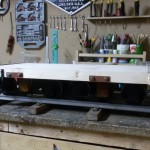 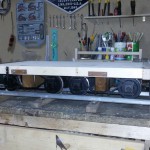 The new riding car will be designed as aux. water tender. The coupler will be installed, once the trucks were in place to determine the correct height. On such very short cars, the couplers can be mounted directly to the frame.