Last week I told that I’m going to do some test’s for the new skeleton logcars. I soon realized, that 24′ logcars would lead to derailment on direct 4′ radii S-curves as usual on turnout connections. This comes due to the body-mount couplers on the Bachmann Shay, which pushed the cars out of the track on such curves. At least, 20′ cars were acting much better. But finally, they are not so far away from my existing 18′ ones.

Another thought that came to my mind was the length of the logs in proportion to a sawmill. Longer logs would make a possible sawmill even longer and bigger in size. So, maybe the 16′ logs on 18′ logcars are just the right size… 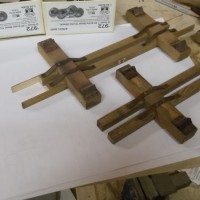 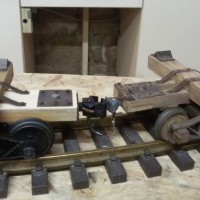 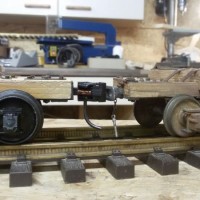 So I grabbed one of the old log cars and did some experimenting on them. Finally I was able to install the 830 Kadees and I switched the trucks to the new ones.

Another new detail is the hand brake which got installed on one end of the car. Since only one truck is braked, I removed the brake rigging from the other. 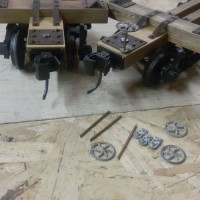 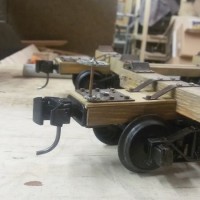 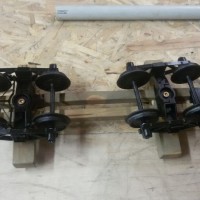 With the first car done, I started work on 4 more skeletons as well by dismantling, rebuilding and assembling. 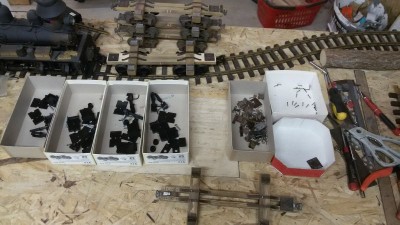 Beside the big Bachmann Shay, the Accucraft one got Kadees installed as well. They look somewhat odd on the old T-boiler-type Shay, but it’s okay for me. 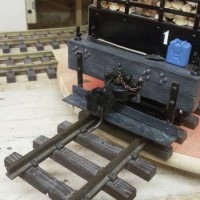 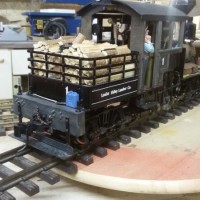 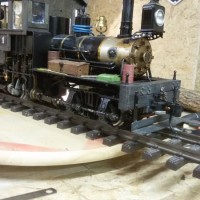 I also spend some thoughts about the log cars. The old and short 18′ skeleton log cars are hard to equip with Kadee’s due to the construction. I would also like to have some longer log cars, say 20-24′ long. So I decided to build 4 new cars and sell the old ones. For the new cars, I bought some Kadee archbar trucks, which are all-metal with detailed wheelsets and break rigging. Only the high flanges are a minus point on this trucks. 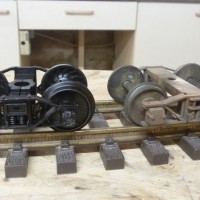 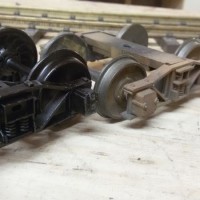 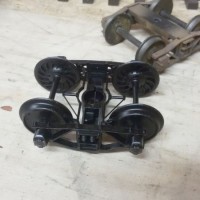 The next days, I’ll go to figure out how long the new cars can be to negotiate regular tracks in the garden. I also ordered some log bunks and other Ozark castings for the new cars.

In the past days, I rebuild the freight cars to Kadee couplers. I started with the flat ar and soon ran into the first problem. Once the correct coupler height was measured, I realized that the car bodies are two low above rail-head to install the couplers at the correct height. I had a closer look to the truck mounts and simply added a 4mm plywood layer to the  bolsters and raised the car body on top of the trucks. The car not only get’s the perfect height for the couplers, it even look much better in proportion at all, especially together with the locos. The following photos shows the rebuild of the other freight cars, since I did only a few photos on the flat car. 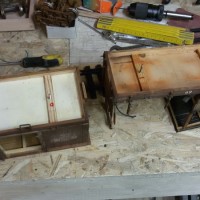 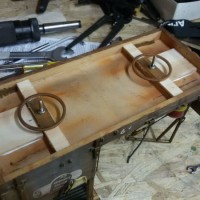 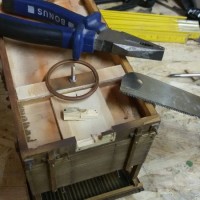 I glued in some more plywood block for the correct coupler height. Once the coupler pads were in place, I made the  cut out to the end sills with a fine razor saw files. The first version I tested was the coupler in full size, which leads to an outside overhang of 4mm which I covered with a crown-piece of wood. 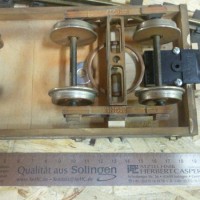 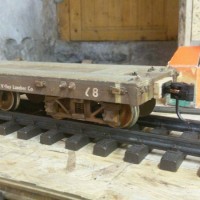 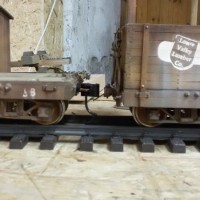 It worked okay, but didn’t match my feeling well. So I cut off 4mm from the rear of the draft box and installed the couplers flush with end sills. The second version was exactly what I was looking for and I’ll use them on all cars. The right photo above shows the rebuild flatcar beside the not-yet-touched workcar, which has the same frame. It clearly shows the different height and the changed couplers. 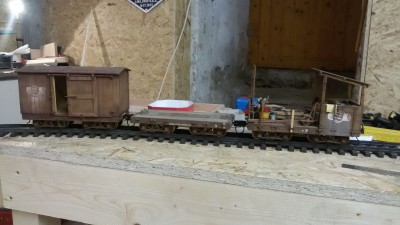 The next day, I finished  the other cars as well to the same pattern. So I’ve the first three cars done. But the most important part was still missing – how’s the performance on track? I did some test runs on my temporary garden railroad which features very rough track. the couplers work perfect and keeps the train connected in all situations. I even made a test run with 3′ radii curves in a direct S-curve. Kadee recommends 4′ radii curves with body mounted couplers on the Shay, but in my test, they also worked down on 3′.

Next project will be the waycar. Due to ta different frame pattern, the rebuild might be a bit different. And I’ll use the rebuild as well to add some brake detail to the waycar.

BTW: I’m going to weather the couplers and rebuild-sections later when all cars are done to avoid multiple airbrush-cleaning…

See you next time, Gerd

Hi folks, since my 5″-gauge railroad is ready for the upcoming season, I decided to overhaul my smaller garden railroad trains next. I look forward to build a garden railroad for my US log trains one day. While running my trains in the past, the stylish Link&Pin couplers are a mess on garden railroading. They […]

[WBE] A new loco for the Hon30 layout

Posted by Gerd on Monday, 3 April 2017 with 2 Comments
in Rolling stock

Hi folks, last week, I got the latest release of Minitrains, the LKm Ns2f diesel loco. It’s a modern type engine (built 1953), but I couldn’t resist. Since the loco is late built, I’ll keep her un-weathered Cheers, Gerd