Posted by Gerd on Tuesday, 12 December 2017
in Workreports CFF

the Resita loco is rolling!! But still not from own power. Last weekend I assembled the drivers and installed them in the frame. I had to wait for replacement axles, since the delivered ones were too short. Thanks to the great support of Mr. Reppingen at this point.

The chassis of the Resita features four axles, which allows side-move for several millimeters. The main shaft from 4mm stainless steel is installed in the outside frame as usual, but the wheels are riding on bronze tubes, which can slide over the steel axle. A screw in the steel axle transmits the power to the tube. 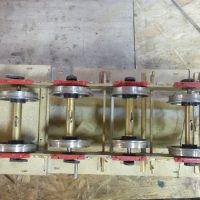 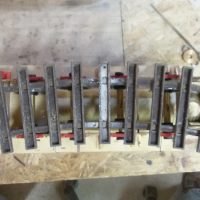 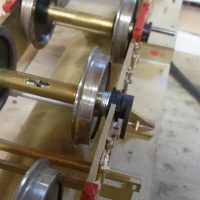 With this setup, the loco can run on 2′ radius tracks. But it looks odd with the huge engine on such a tiny curve. Which leads me directly into some thinking about minimum-radius :

The prototype uses Klien-Lindner-axles on the first and fourth wheelset and is able to run on 30m radius curves. Calculating the prototype minimum radius down to 15mm scale, the tightest curve for my model should be 5′ radius (!). Nearly all garden layouts in my area are built with LGB-R3 which has a 4′ radius, which will be used on my future railroad as well.

On the wider curves, the full side-movement of all wheelsets isn’t necessary, so I locked the center drivers with some washers. As on the prototype, only the end wheelsets are moving. this setup works even fine on 3′ radius, which is the smallest one I can run my Shays on. 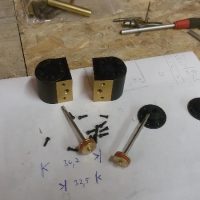 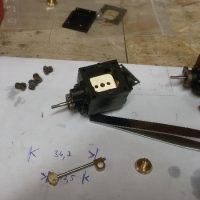 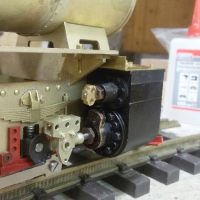 Next I assembled the cylinders and mounted them temporary to the frame. The last photo shows the reshaped rear cylinder covers.

Since the drivers were already in place, I adjusted the cranks and installed the coupling rods. The loco is rolling very smooth and I look forward to get the valve gear attached soon as well for some test-runs on compressed air. 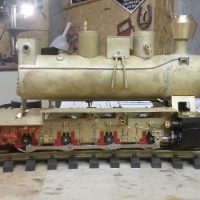 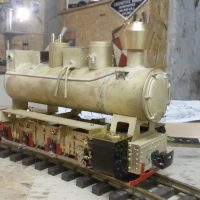 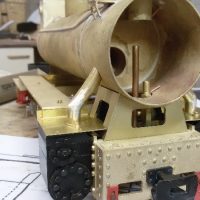 Last job this weekend were the cylinder top plates from brass sheet and the steam-feed-pipes bend from 8mm round-brass.

Let’s see if the loco is running next week ;-)