Plans & ideas for the Garden rairoad

Posted by Gerd on Tuesday, 31 July 2018 with 2 Comments
in Layout construction

Since we moved to our new home, I’ve ideas in mind to build a 1:20.3-scale garden railroad in the backyard to run my Romanian and US logging trains. After finishing all remaining work at the house as well as basic gardening complete, it’s time to get the railroad started as well.

At the beginning, our property has some heights steps and a narrow shape and I’ve to leave space for kids playground, vegetable gardens and family space at all. So my railroad will be limited in space as well as in the design. But I’m sure, my railroad will become something special.

There were at least some facts, which were more or less clearly defined. The lower station and starting point of the railroad would be mounted to the wooden fence along the neighbours terrace in the lower portion of our garden. The height was determined backwards, coming down a 3.5% grade from the upper portion along the fences. This way I got a raised station which allows good access to live steam locos and for switching.

The further route, fact #2, should run to the north end of the upper portion to a second terminus station to create a point-to-point operation with approx. 100′ (30 m) of track in between, mostly on 3.5% grade. A continuous loop layout was difficult to create, since the grades in the ground are hard to negotiate as well as the coming veggy gardens to be installed.

Some while ago, I used SCARM to create a model of our garden for railroad planing. After tons of discarded plans, I came to this one which seem to be the best I can get. 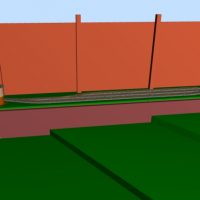 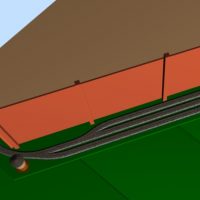 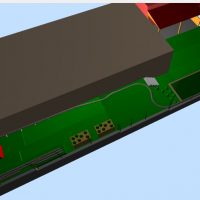 The stations are designed to hold 11′ (3,3m) trains. The lower station has a short 2-track yard at the end, which can be used as log dump track or storage track for cars. The short track in front will be used as tie-up-track for locomotives, especially live steam. The lower station will be mounted to the fence and the first 3,5% grade to the upper garden will bend along the fence and concrete wall round the kids playground. The upper station will be raised on cinder blocks, to have better access for switching. Once the upper garden is reached, I like to embed the railroad into the garden for some nice scenery. Along the route, I may add 1 or 2 logging spurs or camps for additional operation.

That’s it for the moment, let’s get some material to get the railroad started in real.

since I got the two Bachmann “geared steamers”, many years ago, I was in trouble with two different fuel types on a single logging railroad. While the Shay was equipped with a wood load, the Climax was a coal burner. Now I found the time to rebuild the Climax as well. 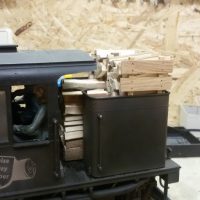 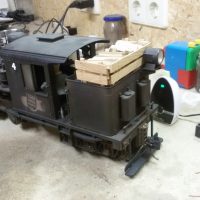 I still need to touch up the weathering, also to blend in the re-newed road number.

Posted by Gerd on Wednesday, 18 July 2018 (Comments Closed)
in - Uncategorized

we just returned from a spontaneous short vacation trip yesterday evening, so I don’t have any news to show on the blog this week. But I got some new ideas for future projects. So please stay tuned and see you next Tuesday as usual with some new logging railroad updates.

Posted by Gerd on Tuesday, 10 July 2018 with 1 Comment
in Workreports LVLC

Hello, since I seem to be in “Logcar-buliding-mode” at the moment, I just switched scale and spend some attention on my 1:20.3 skeletons. I original build them with 18′ length to make them suitable on 3′ radius curves. Since I moved on to 4′ radius, I did some test runs if I can enlarge my […]