Posted by Gerd on Tuesday, 23 April 2019
in Workreports

the last week, I rebuild caboose #7 to the new scale of my 5″-gauge trains. When I build this caboose for my Bear Creek Lumber & Railroad, I had the unusual 4-wheel cabooses of the Uintah Railway in mind. 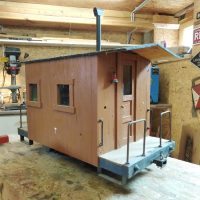 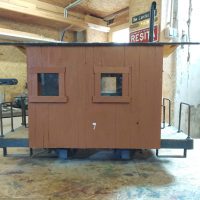 So the tiny and low placed windows are coming from the Uintah design. When I removed the copula during the last rebuild, I had plans to enlarge the windows on the top, but finally I didn’t. I was just to lazy for this additional rebuild. Finally, this will now turn into a benefit…

First I removed most of the interior before I started the rebuilt. The wooden strips on the outside are simply nailed in place, so it’s easy to lift them off for changes. I replaced the original fake doors with new ones in 1:7 scale. 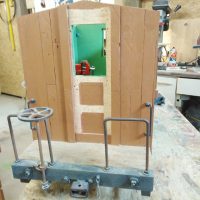 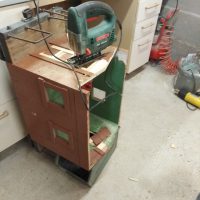 The center photo above shows the cutting line. The black marker line is only for the photo, there’s a true pencil line for exact cutting below. The whole caboose got reduced in height by 2.16 inches.

Once the side walls were cut down, the roof immediately fits into place as before. As on the Shay, the model of the caboose has well won in “mass” while losing the “toy-character”. 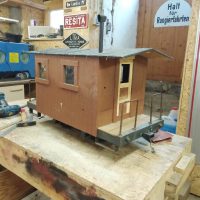 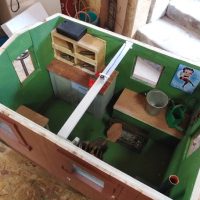 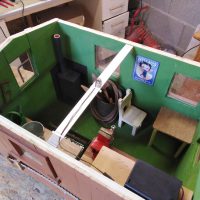 I topped up the paint as necessary and started to reinstall the interior. I added some parts from the work caboose as well, as the work caboose will be rebuilt into an equipment flatcar later. As before, the caboose features interior lightning, but I didn’t reinstall the red lanterns yet. I’m looking for a new solution for the end-of-train marker light. 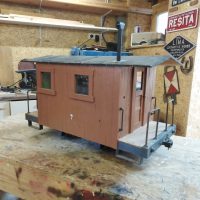 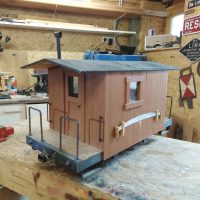 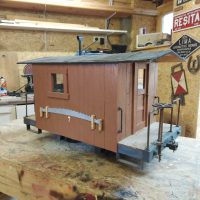 At the entrance to this post, I mentioned that I skipped the rebuilt of the windows last time… As we see today, this was a very good decision. One could even think, that there was some subliminal inspiration somewhere in my back head, that one day, I would switch scale as I do right now… Remember, the Shay finally was also a very simple rebuilt…

Last week I also evaluated the existing 20′ logging flatcars, which will perfectly fit as 22’6″ flatcars for the new scale of 1:7 without changes.

Next project will be the camp & box car, which might be a bit more difficult.