Posted by Gerd on Tuesday, 14 April 2020
in Workreports

today, I like to share the last part of the brake installment on my 5″-gauge rolling stock. The last report featured the brake beams and shoes, now it’s time to get them connected to the brake gear. To determine the length of the brake rigging, I used threaded rods first. The final pieces are made from 4mm-rods with fork heads attached. 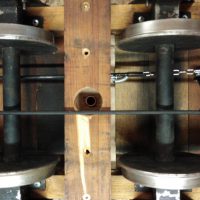 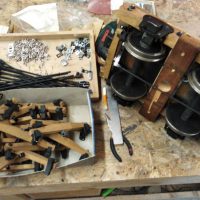 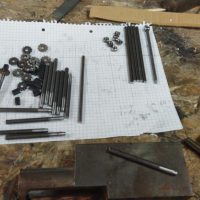 The force of the brake gear is transferred by a short length of chain to the draw-rod which is leading to the rear (inner) brake beam. The link attached to the brake beam reverses the force also to pull the front brake beam against the axle the same time via the lower connecting rod. The second link is anchored against the frame at its top. I added a small pull-spring near the interchange between the chain to the draw-rod to ensure proper brake release. The last photo above shows the final brake gear parts in progress.

The next set of photos shows first test’s during the initial construction phase. Even one single braked truck can hold the car on step grades, even with heavy load, which will be shown later. It’s also possible to apply the brakes on a grade under heavy load. 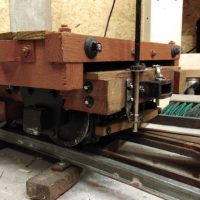 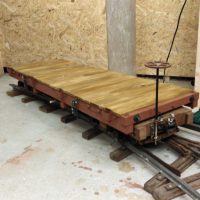 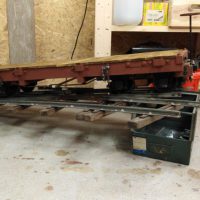 The final version of the brake gear features a square head to take so-called “Hickeys”. These were huge square keys, used by the brakeman to set the brakes individual on each disconnect. As the Moody Lumber uses the former disconnects as trucks below flatcars, I also made brake wheels with rods, which can be attached by a short threaded pin. This way it’s easy to remove the brake wheels for storage and transport of the cars, or when using the trucks as disconnects again. 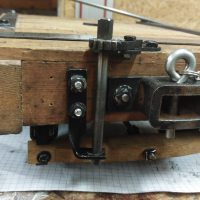 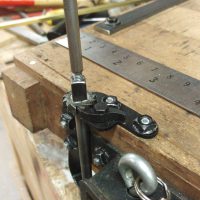 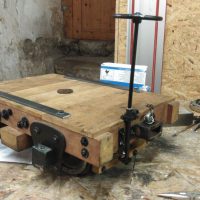 As shown in the past blog posts, I used serial-construction for nearly any parts, to produce 13 set’s of full brake gear the same time. Beside the twelve disconnects, I also equipped my caboose with this new brake design. The caboose already featured working brakes, but those were very crude and not as detailed as the new one.

Now to the final question: How good is the new brake system? I made a short video showing the brake in action. The grade is set to 4% in this clip.

At least, I finished all the rolling stock rebuild for my Moody Lumber Company so far. All cars are now re-scaled to 1:7.2-scale, are equipped with working brakes and additional details. Once my Shay is repaired and back in service, all my 5″-gauge rolling stock is finally ready for the new season.

See you next time, Gerd