first I used my existing Deltang transmitters from my garden railroad trains to control the tiny 009 locos. But soon I had the idea to make a small handheld transmitter especially for the small locos. Since I couldn’t find a small housing, I made my own from beech wood. Both blocks were milled to sice and hollowed out to take the components. 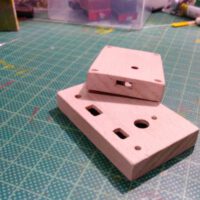 Beside a Deltang Tx2-transmitter, you’ll need some switches, LDE and resistors, together with a throttle pot. I installed a small 300mAh Lipo battery for power and as there was enough space, I also included the charging-module inside. To make the control LEDs of the charging module visible, I added small window in the backside. Circuits, how to wire the Tx2 are shown on the Deltang.co.uk website. 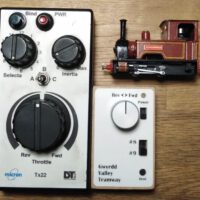 After final testing, all components were stuffed into the housing and I added printed lable on top.

To operate two trains the same time with the new transmitter, I addapted the Selects-function. Instead of the regular 12-channel-switch, I added a regular switch for only two locos. I simply summed the resistors to simulate all the other channels. My transmitter now uses channel 1 and 6 only. It’s recommended to habe channel 6 involved, as it’s used for calibration.

At this point, I’ve an important hint. To use the Selecta-function, the Tx2 has to be set to profile-1. This automatically include the inertia-function. If you won’t use the inertia, you’ve to wire pin 6 anyway to avoid failures. To simualte the inertia-pot, simply wire pin 6 to ground and also via 20kOhm resistor to +3.3V. This set’s inertia to inactive. Leaving pin 6 floating causes failures and the transmitter will not work. It took me some time and nerves to figure that out.

ATTENTION – Please read data-sheets and instruction of the components you might use. Any usage of the shared documentation on this blog is to your own risk!

Posted by Gerd on Sunday, 17 January 2021 with 4 Comments
in Operation Sessions

it’s time to show the third part of the Kerr-Stuart loco.

Today’s post shows the cab and changes I did. Since the die cast cab adds a lot of weight to the back of the loco, I had issues to keep the overall balance. I added lead pieces to the side tanks. The right block is made from styrene and will hold the screws to mount the cab to the frame. 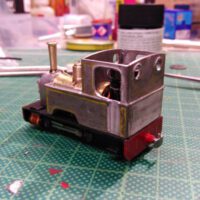 Once the inside walls were glued to the water tanks, I filled the gaps with putty and filed the open section flat. Next, I removed the rear coal bunker. As I had to lengthen the back wall down to the frame, I used styrene again, so reduce weight at this end.

I also replaced the die cast roof with thin sheet metal. All parts are glued together with epoxy and I used putty on all gaps to get a smooth body shell. 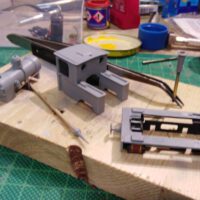 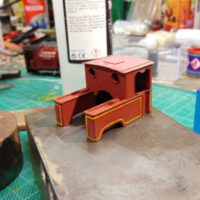 Since white metal doesn’t hold paint very well, I spend a coat of primer first before painting the loco in oxide red. I used the airbrush for most painting work. The black sections are hand-painted with a pencil. I also made a special lining-pencil and hand-painted the yellow lining. It took me some while and I had to correct it a couple of times, but finally, I’m very happy with the result. A final clear coat secures the paint. 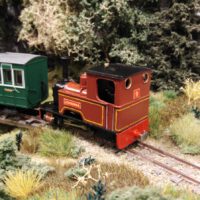 At least, here’s a photo from the underside, showing the loading-socket at the top left. The center-slot is connected to plus, while the outers are minus. Therefore, it’s equal which was the plug is connected. Opposite to the socket is a tiny SMD-power-switch. The switch is wired that way, that the loco has to be turned off to load the battery. Additional the battery includes a saftey-PC-board to protect the battery from damage.

Next post will show my new homemade Deltang transmitter I made to operate the small 009 locos.

The kit provided by Five79 is designed to fit a N-scale chassis. To make room for the motor, the boiler is missing the lower portion. Since the motor on the Minitrains-chassis will be located in the cab, I made a new full-size boiler from brass. I milled a grove into the boiler to take the LiPo battery. All the RC-components will be fully hidden in the final loco. 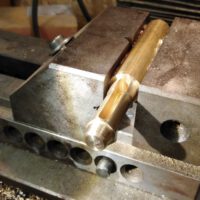 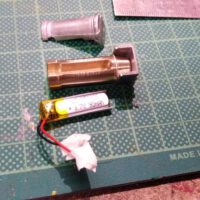 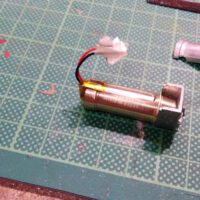 When spending attention to the sand dome, I realized that the shape is more oval than round. A few minutes later, a new sand dome was finished on the lathe from brass. To close the rear of the smokebox and to keep the boiler on height at the rear end, I soldered two pieces of brass into milled slots and filed them to shape. The smokebox is the only original boiler part so far. 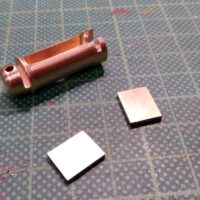 The stack was the next part to be made new from brass. The stack features a threated 2mm shaft to be screwed into the MT chassis. This holds the boiler in place as common on many Minitrains steam locos. The stack saddle and stack ware made from brass again. 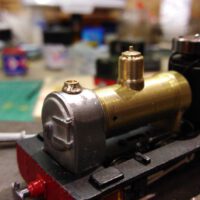 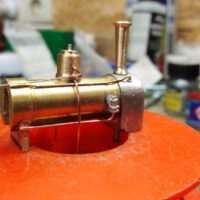 And while spending so much work into a new boiler, it would be a shame to stop when it comes to details. So, I added sand pipes, levers and blower pipe from wire. The check valves are included in the kit, but got new pipes attached.

The next post will show the work I spend on the cab and water tanks.

six years ago, I got the chance to buy a rare Brian Caton live steam loco in 009-scale. I once saw his great little engines in action more than 20 years ago on a convention, but I was never able to get one.

Since than, my little “Jupiter” was running solo either on my especially built Egger-Bahn micro layout ot the “Travellers Table Top Tramway”. In December 2020, I decided to expand my small 009-adventure and to add some more bits.

The first project is a small locomotive, powered by batteries and RC. The live steam loco will short any track power and the small Egger-Layout doesn’t use track power at all. Some years ago, I already converted a Minitrains Gmeinder loco which worked well.

So, I did some research on the internet and found a RC39 kit provided by Five79. This Kerr-Stuart “Skylark” kit turns out nice on a Minitrians F&C chassis. 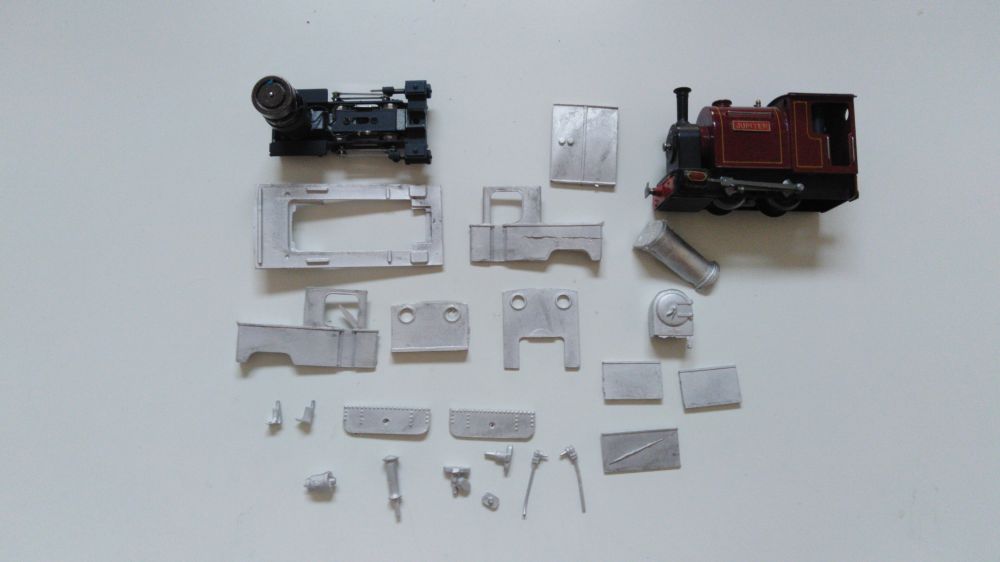 First, I cut the frame to match the chassis. The prototype Skylark is an 0-4-2 loco. Since mine will end as 0-4-0, I decided to cut off the rear coal bunker. This will also match the style of the Caton loco. 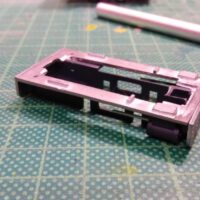 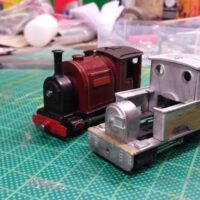 All joints got filled with putty and sanded smooth for a perfect finish later.

Next, I had some troubles with the buffers in the kit. They looked de-formed and didn’t work well with Peco 009 couplings. I checked my scrap box for replacements, but couldn’t find something that would fit. Could I have some buffers as used on the Caton loco… Wait a moment… 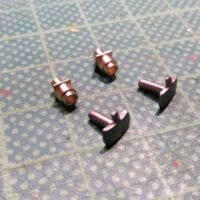 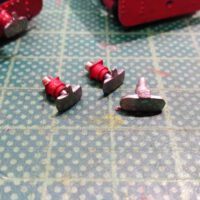 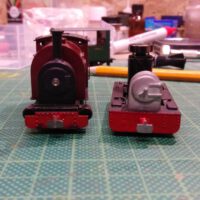 I measured the buffers on the Caton loco and made a pair out of steel and brass. I used the lathe and mill to make the tins parts. The shaft on the buffer is 1.7mm in diam. The parts are assembled by press-fit and glued to the frame with the rear 2mm shaft.

The next post will show details on the new made boiler for this loco.

I hope you had a good start into 2021. I wish you all the best and especially health!!

Those who are also following me on youtube might have seen the video below already. In the upcomming weeks, I’ll share more details about the new little loco and it’s features. I’ll also spend the first months this year to do a rebuild of the also shown micro layout. I’ll add some typical buildings and some more details to it. After all the forestry railroading last year, it’s fine to build something different in between and I hope it will be fine for you as well ;-)

So stay tuned for a new modelling adventure.

Posted by Gerd on Saturday, 26 December 2020 with 2 Comments
in Operation Sessions

Posted by Gerd on Saturday, 19 December 2020 with 3 Comments
in Waldbahn Gazette

I’m not very busy in logging railroad projects at the moment, but here and there, I find other projects to be done. Like this sweet one here. 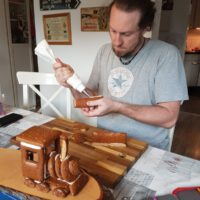 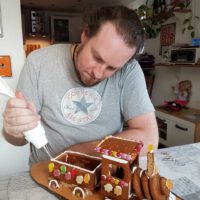 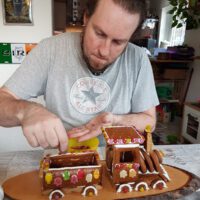 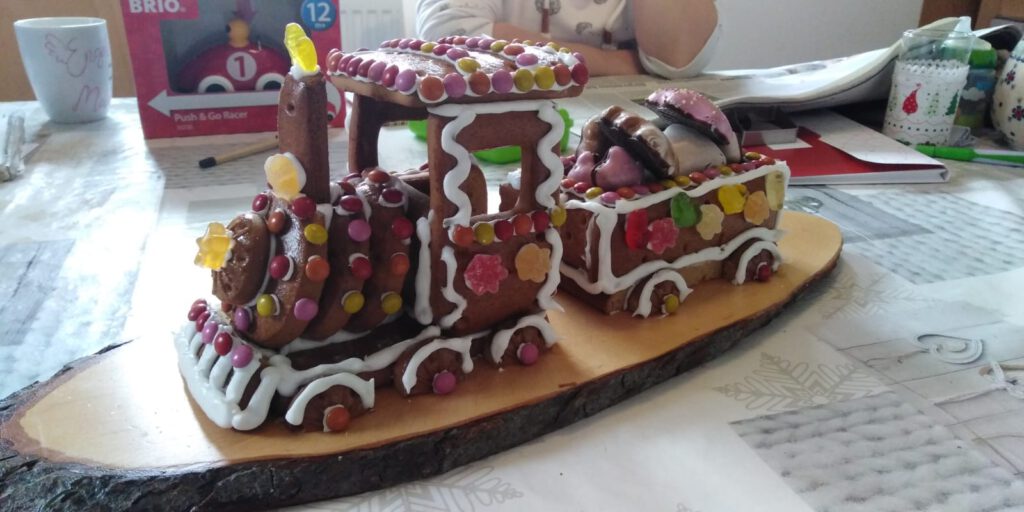 I plan a new small model railroad layout to be build next year. It will not be related to logging railroads as usual on my blog, but I’ll report about the project here anyway.

Posted by Gerd on Monday, 7 December 2020 with 4 Comments
in - Uncategorized

Posted by Gerd on Thursday, 26 November 2020 with 5 Comments
in Waldbahn Eusserthal

as announced last week, there has been some small changes on my Hon30 logging railroad, all affecting the rolling stock and motive power. Some months ago, I decided to get rid of both Brigadelocos and all the HFB-wagons. These models were seldom used as they looked to big on the tiny layout. A small 0-4-0 looked much more plausible with a 3-car consist.

With this decision, the Waldbahn Eusserthal now operates as a 750mm gauge railroad only by using the Egger-type Minitrains locos and two Roco locos. Don’t worry, the Shay is also still in service. But this is all I need to operate this small layout, nothing more. 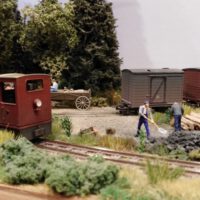 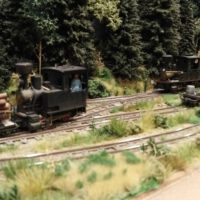 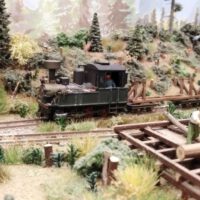 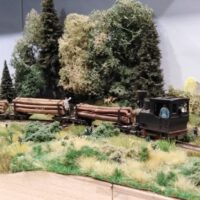 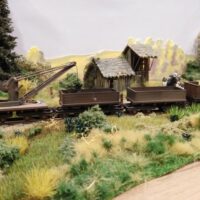 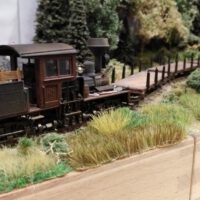 Anyway, a new addition came in October this year, when the WBE officially started the tourist and museum trains. Therefore, three open passenger cars were acquired and brought into service. The trains were operated by diesel locos on weekdays, while a steam loco will pull the trains on weekends and holidays. 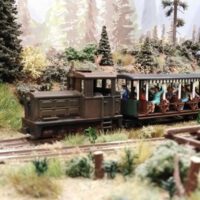 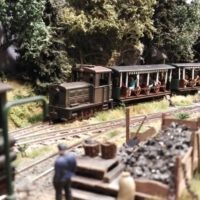 Many thanks for your patience and see you next time,
your Waldbahner aka Gerd.