[WBE] The new module is done

Posted by Gerd on Tuesday, 6 March 2018 with 9 Comments
in Layout construction

just in time for the model train show starting on Friday, the new module got finished. I added the backdrop and some small details. I’m very pleased with the result, which turned out better than expected. 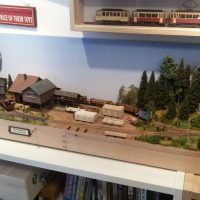 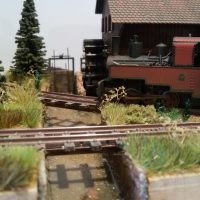 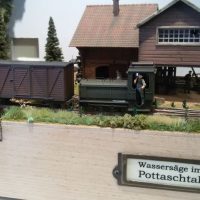 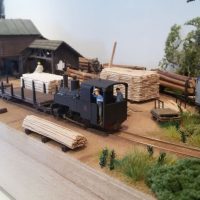 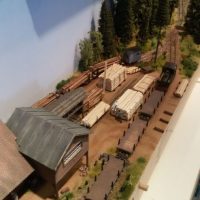 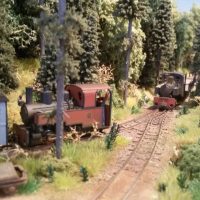 I’ll build a transport-crate for the new module this week and the whole layout will travel to Sinsheim (Germany) Friday morning. It would be nice to meet one or the other reader of my blog in person ;-)

Well, the most work is done…

Since I got the landscape and flora done last week, I just finished the last huge step, detailing the sawmill-area. I also printed the name plate, which is shown in German here. There’s also an English version printed. 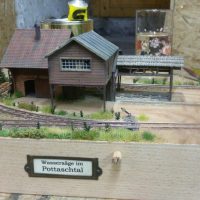 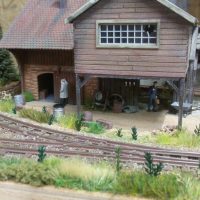 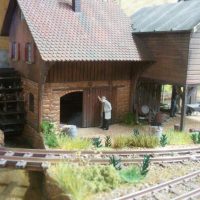 The stacks of boards and timbers are made from balsa wood and are glued board-by-board. 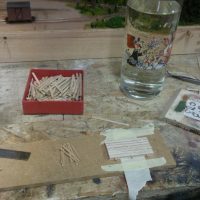 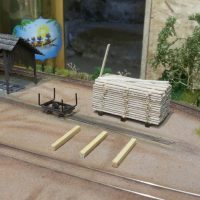 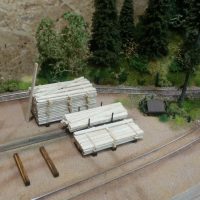 At least, there are some final touches necessary here and there as well as the backdrop. So the module will be ready for the show next week in Sinsheim/Germany ;-) 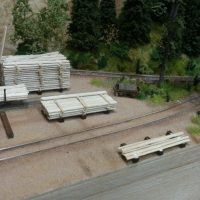 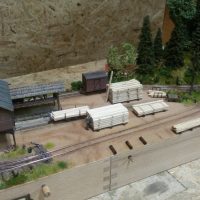 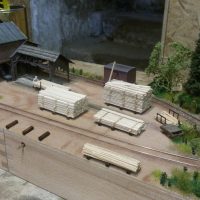 Hello, the last week, I’ve build the weir for the water-wheel and added it to the canal. Since the time is running by very quick, I directly planted the trees to get the progress continue. The next evening, I started with the bushes and grasses. It took some time to get the whole layout covered, […]

Hello again, another week has passed. I added the ballast to the tracks as well as basic green ground cover I use. The ballast is spread out dry along the rails. I use a mixture of Noch model train ballast with sand and fine turfs. Once the ballast is done, I moisture everything with rubbing […]

[WBE] digging out the mill creek

Posted by Gerd on Tuesday, 30 January 2018 with 7 Comments
in Layout construction

Hi folks, I just got the “go” for the Exhibition in Sinsheim/Germany on March 9-11th. So it’s time to get some more progress done on the new module. I made a cut out to the module box just beside the sawmill to add the mill creek. I added strips of plywood to gain some depth […]

[WBE] A new module for my Hon30 layout

Hello logging railroaders!!! After spending so much time on my Resita loco, I’ll switch to a smaller scale project. I just started work on a new module for my Hon30 forestry railroad. I look forward to exhibit the layout again in March 2018, so it would be great to show something new. Once the module […]

Posted by Gerd on Tuesday, 5 January 2016 with 1 Comment
in Layout construction, Waldbahn Eusserthal

Hello logging railroaders, I’m proud to present my latest module creation finished. It’s the last (by now) module of my Hon30 logging layout. Enjoy the pics :-) Now I’ll focus more on my rolling stock in H0n30. Some new locos have to get weathered and detailed and there are some more models on my wish […]

Hello, the new year starts with some model railroad progress. I mounted the backdrop to the new Hon30-module and set the trees. I finished the very simple wooden bridge with some beams and added planks for the foot path in front of it. The right portion will show a meadow with barn and cows, so […]

Hello, today, I’ve an update on my Hon30 layout. As I decided to make a creek on the new segment, I had to found a way to model the water. After research on the internet, I decided to use products from NOCH, which are the same as Woodland Realistic Water and Water Effects. First I […]