Hello fellows and welcome to a new loco build project here on my blog.

When I finished my Krauss-loco 763-237, I immediately got the idea to build another one, using LGBs 0-8-0 chassis of the Ruegen-loco Mh53. This new loco should be based on the MAVAG type 85, also known as MAV-492. Such a loco is still in operation under number CFI 764-243 and runs tourist trains on several ex CFF lines. As on the Krauss loco, my version will be a freelanced loco and got it’s own number.

Over several month, I collected parts from eBay and spare-part dealers for this project. Since the parts are combined from different locos, I start to call this the “Frankenstein”-project ;-) 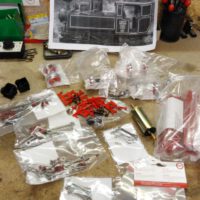 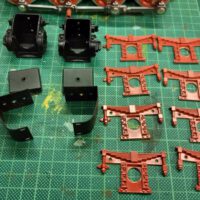 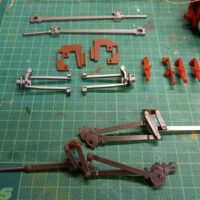 Cylinders, journal leads and springs as well as further detail parts came from a LGB/Aster Tssd loco and were sold on eBay some while ago. A saxonian IK by LGB spends the valve gear. 0-8-0 power unit comes from LGB Ruegenlok as mentioned above, also the connecting rods, but I swapped the wheels with some from LGB FrankS.-loco. For modeling, I use several photos from the internet as well a simple side view drawing of such a loco. 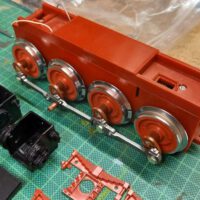 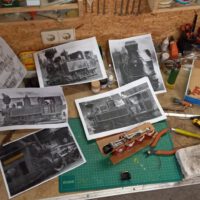 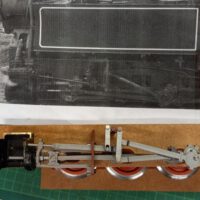 The wheelbase of the power unit matches well in 16mm/scale (1:19). The wheels are to big, but will be hidden behind the outside frame.

I’ll built this loco the classic way, avoiding 3D-printing and cnc-operation. Only my own CFF-couplers are 3D-printed. To start with the side frames, I used double-sided photo-sticker to stick 2 sheets of 1.5mm ABS plastic together. For better drawing, I add a layer of masking tape on top. 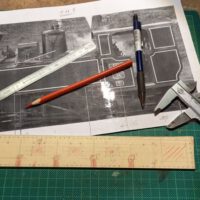 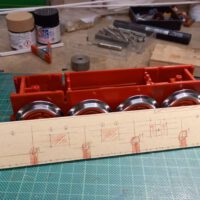 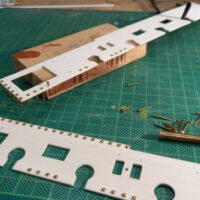 I use a press-drill for holes, fret-saw and files for cutouts and the milling-machine for precision. Once the parts are machined, they are split in half again and I have to identical side frames. To model the rivets, I press 1mm brass nails into predrilled holes and file them flush on the backside.

Will be continued next week.

Posted by Gerd on Tuesday, 22 June 2021 with 1 Comment
in Operation Sessions

Let’s take a trip with Krauss loco CFF 763-247 on the railroad of Oituz. After leaving the station at the sawmill, the train runs through forests and meadows before the valley gets narrow and the grades steeper. Last runaround loop in the forests is at Fagrotund. From this point, the empty cars are pushed up the line to the final loading points. 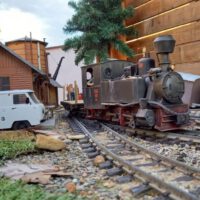 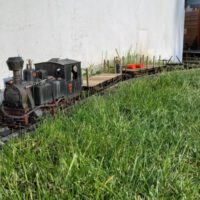 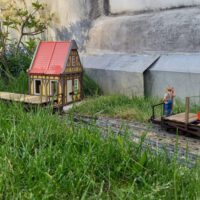 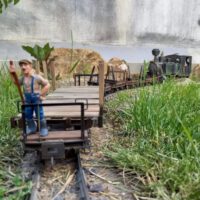 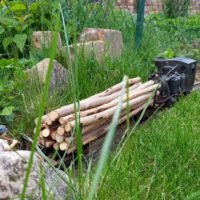 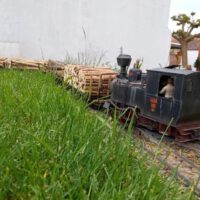 Later, the loco returns with a string of loaded cars to the Fagrotund. Here the cars are shunted into new order, keeping the disconnected log cars to the end of the consist.

And as usual on logging railroads, no running without derailments. I tried to rerail the loco with wood as on the prototype, but this didn’t work well. 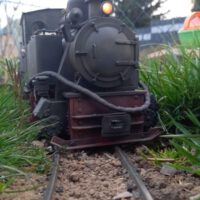 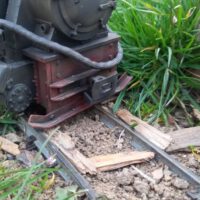 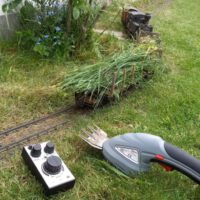 The reason for the derailment was grass growing over the rails. So, it was time for some gardening… with use of the railroad off course :-)

Once done, Resita loco 764-467 made another trip with a Moldovita-style consist. 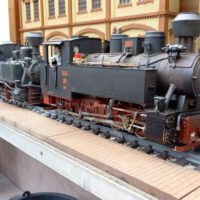 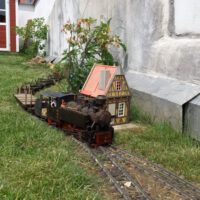 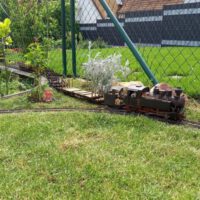 Next report will be from my workbench, where I already started the next project…

Posted by Gerd on Tuesday, 15 June 2021 with 1 Comment
in Workreports CFF

meanwhile, the garden railroad season has started. After a cold and unsteady May, several log trains have been operated in June already. And while doing so, I came to the idea to add some changes to my Resita loco. When I choose CFF 764-467 of the Campul Cetatii line, I did this for several reasons. One of them was the fact, that the loco didn’t had headlights in the later years, so there was no need to model them as well.

Two things have changed since them. I missed the headlight and I found very nice brass castings to model them. So I spend a backdate to my Resita loco from 1993-state back to 1989 when the loco was still equipped with lights, generator and the roof extension on the engineers side.

I decided for optical modifications only, so the headlights are non-functional. 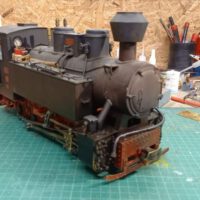 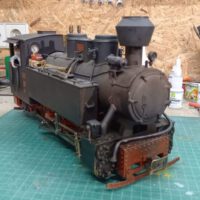 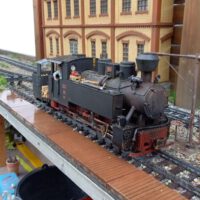 Unfortunately, the first run after the modification was surprised by rain. So I went back into the workshop and it came, as expected… I added LEDs… 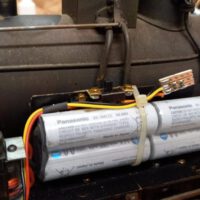 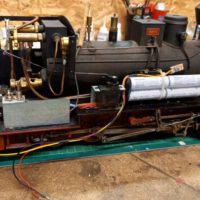 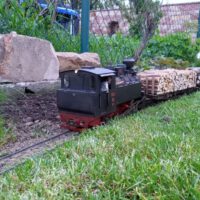 I don’t see a reason to remote control the lights, so I simply added a switch under the engineers side water tank flap. The small PC board holds resistors for the micro LEDs, installed in the headlights. BTW, I didn’t install direction independent lightning. It’s simple all on/all off.

The last photo shows a typical train on the Campul Cetatii line, heading down to the mill.

Posted by Gerd on Tuesday, 1 June 2021 with 3 Comments
in Layout construction,

Hi folks, after the video presentation of last week, here’s the final building log of this micro layout. Each segment is 75mm wide and the backdrop 60mm high, while the track length is approx 3′. To make the backdrop, I searched the internet for a good photo of sandhill forests. With simple graphic tools, I […]